Read Full Story
The GDP for the third quarter ended December 2018 was announced on February 28, 2019, along with the advance GDP estimates for the full year 2018-19. The chart below captures the quarterly perspective in detail. 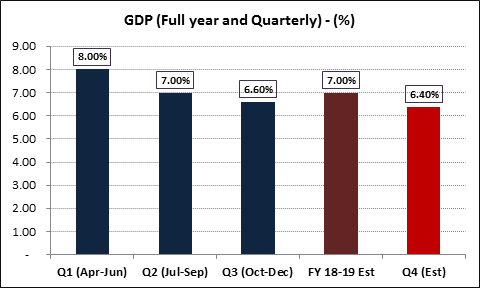 The GDP for the third quarter came in lower than the previous two quarters at just 6.60% on the back of weakening trade amidst the US-China trade war. Growth also took a hit in the December quarter as the markets had witnessed a financial liquidity crunch in the aftermath of the IL&FS default. The sharp rise in the price of crude to $85/bbl and the rupee weakening as low as 74.45/$ also put pressure on the overall GDP. As a result, the second advance estimate for full year GDP has been downsized to 7% (shaded in brown). That pre-supposes a much lower GDP in the fourth quarter at 6.4% (shaded in red). The Gross Value Added (GVA; GDP excluding taxes and subsidies) is expected to grow at just 6.8% for the full year.

How the 3 components of GDP fared in Q3
Agricultural, the primary component of GVA is expected to grow in 2018-19 at 2.7%, sharply lower than the 5% growth recorded the previous fiscal year. The new minimum selling price (MSP) formula at 150% of the cost of production may not be working at the ground level. Even mining and quarrying is estimated to grow at just 1.2% for the full year compared to 5.1% in the previous year.

However, there was good news on the manufacturing front with the GVA expected to grow at 8.1% for the full year compared to just 5.9% in the previous year. The manufacturing growth is expected to be largely driven by demand pull factors and tepid levels of CPI inflation. Barring the sharp rally in October, oil prices have also been relatively steady. Construction is also likely to see a spike in growth from 5.6% to 8.9% in the current fiscal.

On the services front, tourism and telecom services slowed but financial services are expected to improve by more than 100bps to 7.3%. However, public administration, defence and other government driven services are likely to see a sharp fall in growth this year.

Locating the pain points in GDP growth
Apparently, there are several pain points and even the government is not expecting the full year GDP to grow beyond 7% (assuming no negative shocks in the fourth quarter). Before we get into the pain points, let us start with the good news. Manufacturing GDP is getting back on a robust track and that is visible in the current year estimates. Now for the pain points!

In a nutshell, the dividends of GST and other reforms are yet to be fully realized. The latest CMIE report has projected jobless rate at close to 7.3%, with most of the pain in the SME segment. That remains the big challenge!