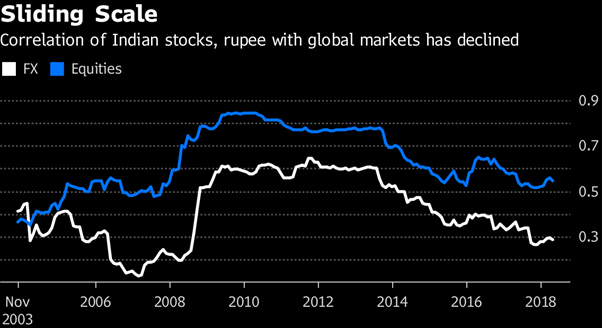 How global events may steer the world economy going forward?

Global events have an impact on the macroeconomic scenario, even if not on the equity markets. Let us look at the 4 major global events that could have a bearing on the world economy in the next one year.

An interesting trend has been seen in the Indian markets over the last few years as captured by the Bloomberg chart below.

The correlation of the Indian equity markets (as measured by the Nifty) and the Indian rupee has been reducing vis-à-vis the global markets. Of course, the correlations had peaked around the 2008-09 period when global markets went into a tailspin and was followed by synchronized liquidity infusion by central banks across the world. The correlations have reversed to the pre-crisis levels. What does that mean for Indian markets? Do we need to worry about global events?

The answer is that global events have an impact on the macroeconomic scenario, even if not on the equity markets. Here are 4 major global events that could have a bearing on the world economy in the next one year.

How the trade war shapes up

The trade war has been at the centre since March 2018 when the US first imposed tariffs on Chinese imports. Since then, the US has brought Chinese imports to the tune of $500bn under the tariff bracket. While it is adding to costs and inflation in the US, the bigger hit is on China as it impacts the $450bn trade surplus that China runs with the US. Of course, China has been retaliating with counter tariffs, but there is only so much they can do with a huge trade surplus. China continues to thrive on US outsourcing with giants like Apple, Nike and Tesla manufacturing most of their products in China. For China, a prolonged trade war means a slowdown which is already evident from their GDP growth falling to a 30 year low of 6.2%. The implications to exporters dependent on China could be much deeper.

Will there be a full-fledged currency war?

This is the billion dollar question that remains unanswered. Interestingly, we may have just seen the beginning of a currency war with China letting the Yuan drop beyond CNY7/$. This is the lowest that the Yuan has traded in the last 10 years with the US threatening to tag the Chinese Central Bank as a Currency Manipulator. China’s decision to drop the Yuan was obviously intended to neutralize the impact of US tariffs but the side effect will be felt across the world. As the Yuan drops, exporters to China will have a problem as their exports will become less competitive forcing them to drop the currency further. We have already seen the rupee reacting negatively and a prolonged currency war has no winners.

How exactly will oil stack up next year?

Actually, there are no easy answers to this question. There are diverse forces pulling oil either ways. The sanctions on Iran and the OPEC supply cuts have the potential to increase oil prices. At the same time, enhanced shale supply from the US and a global economic slowdown has the potential to depress oil prices. A lot will depend on whether the US and China really prolong the trade war and whether the US really launches an all out war on Iran. These two factors could determine the future course of oil prices in this year.

How the BREXIT shapes up?

In the melee of the trade war, the uncertainty surrounding BREXIT has been forgotten. But that remains a key issue; for UK, continental Europe and beyond. Boris Johnson has promised to extricate UK from the EU, irrespective of an agreement. That means, BREXIT deal could fail and the UK could still walk out without a deal. Bank of England has warned it could push GDP growth into negative territory. An acrimonious BREXIT will depress growth in UK but will also complicate matters for Europe as it loses access to the US-UK axis.

In addition, there will be other factors like climate change, right wing politics and rising protectionism, which will remain the underlying trends of the global economy. We surely are poised for challenging times ahead!