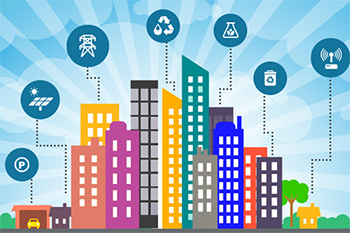 Going by the growth plans envisaged by the current Government, India will need to invest more in its cities to make them more livable. Urbanization is increasing at a rapid pace, and currently about 30-33% of Indians live in cities. This is estimated to reach upwards of 40% by 2030. The urban population would be about 600 million people at that point. It is further estimated that the number of cities with populations of a million or more are likely to double in that time.

A large component of this urbanization would in the form of migration to the existing cities, which would expand and grow in size. Unfortunately, most Indian cities are currently decidedly challenged in terms of infrastructure, and their inhabitants' access to basic services continues to be poor. An increase in urbanization will result in more stress and breakdown of these cities; quality of life there will deteriorate. To be able to continue with the required momentum, it is expected that India would need at least 100 new cities over the next 10 years.

These cities would essentially be Greenfield (built from scratch) entities adjacent to existing cities, and developed and dependent on the existing cities. These Greenfield cities will be built around economic drivers like industries and industrial clusters, SEZs, transport nodes and satellite or intermediate cities.

Over the next few years, India is going to see a fair share of such Greenfield cities. One envisages that these cities will be developed in a structured manner and built for the future - in other words, they will be future-ready. They should have adequate control on their natural resources, and will need high-grade urban planning.

The dynamic changes in physical, economic and technological environments across the globe have resulted in cities using smart elements to improve the quality of life of their citizens and provide superior services to businesses.

Smart cities provide a high level of livability, work environment and sustainability to their residents through superior urban planning and adequate provisions for base utilities and control of resources. The conceptualization of a Smart City varies from city to city and from country to country, depending on the level of development, willingness for changes and reforms, availability of resources and aspirations of the city residents.

In developed countries, a Smart City is one where existing infrastructure is augmented, monitored and controlled, leading to highly sustainable development. In the Indian context, the approach is necessarily different. Since many cities lack basic infrastructure, institutional frameworks and proper governance, a Smart City initiative will first and foremost involve providing basic civic requirements and making the infrastructure robust and scalable.

Indian cities today face significant challenges such as:
They have to learn to identify new and smart ways to manage the complexity of urban living, and problems ranging from pollution, overcrowding and urban sprawl to inadequate housing, high unemployment, resource management, environmental protection, and rising crime rates.

Long-standing urban challenges include those in terms of:
These challenges can be met in two ways - building new (Greenfield) cities or transforming existing ones.

Greenfield Cities
With a view to modernizing India and accelerating the process of urbanization, the incumbent Government has launched two flagship schemes - the Smart Cities Mission and AMRUT (for urban renewal and retrofitting). The mission is to develop 100 cities all over the country, making them citizen-friendly and sustainable. The vision is to develop satellite towns of larger cities and modernize existing mid-sized cities, with the aim of:
Setting up a new Greenfield city has its own set of unique challenges, which is why Smart City implementation requires the assistance of experts in various fields such as consultancy, development, operation, financing and management. One of the very effective models of implementation is Private Public Partnership (PPP) through which the Government of India is developing these projects.

Many private investors have also shown interest, as have developers, designers, service providers and consulting firms. There are obviously vast opportunities for private players in every sector on the path of making the mission possible. One must realize that building a city is a very long-term undertaking that takes upwards of 10 to 25 years, so the urban planning must be robust taking into account changes over such long periods of time, interactions with the regional development and interaction with the hinterlands. It is not only important to focus on a single city but on its interactions with the whole region.

While India embarks on this journey, early movers will definitely have a massively uphill task.

Major Challenges Which a Smart City is likely to face:

Regional plan: Urban planning is the backbone of every city development; however, as already noted, Smart City planning is not a 1-year exercise but more of a 20-year plan with high importance given to the region's overall development. What this implies is that the city must be envisaged vis-a-vis its existence as a member of the region, and the interactions and impact must be carefully studied. The region's planning must augment the city's plans to be able to provide a uniform experience

Obsolescence of technology: In the Indian context, control of infrastructure and resources is envisaging huge investments in technology. Whilst the investment is a small percentage of the overall infrastructure, all this investment is being done with a horizon of between 5-10 years - and technology leapfrogs in much shorter times than that. For example, we have quickly moved from 2G to 3G and on to 4G, from a wired world to a wireless world and from cables to optical fibers. Technology evolves faster than a city, and there must therefore be options to adapt as technology changes or gets obsolete. Technology protocols must be amenable to modification and upgradation.

Urban mobility: A smart city encompasses many dimensions, and a reliable, affordable and sustainable transport system is at its core. Along with public transport systems, development of last-mile connectivity is necessary for optimal utilization of mass transit systems. This is why Smart Cities around the world think about urban transport in a comprehensive manner to improve accessibility and mobility. India's public transport has not been adequate because of the high density of population, poor urban planning and zoning and also lack of investment. As we build new cities, public transport must be the key focus.

Water management: The Water Cycle (water resource, production, distribution, consumption, collection and treatment of waste water) plays an integral part of an urban system. Water and its sustainability are of key importance in new cities, which must aim to be water neutral or positive as much as possible.

Waste management: Sustainability in solid waste management calls for a new approach to solid waste and converting it as a resource. There is a need for solid waste management through smart solutions for clean roads and a healthy environment. Unfortunately, India has just not woken up to this. Cleanliness and hygiene call for a baseline cultural change. Technology could help; however, the upfront investment in some of these technologies or the minimum scale investment is high. Nevertheless, it is imperative that this be planned for.

Funds: A new city would take a long time to develop both the requisite economic drivers and the infrastructure - only after that will it see people stepping in to stay. By the time the city is habitable and has a basic population, the project would at least be 7 to 10 years in the making. Unfortunately, the current funds available for this sector are only for the short-term of 10-15 years. Unless the development of the city is done out of funds that have a 20 to 30 year horizon, these projects are unlikely to survive. India needs a sea change in the way it looks at funding these cities, or their infrastructure.

Employment generators: It is important to plan along with the regional planning and Government on job creation in these cities. A critical focus on job creation is not only on the primary economic jobs created, but on service jobs. The city has to be serviced by people working on the support infrastructure.

Rental housing: There is considerable need to develop a rental housing market to ensure that more people can move in and work in a smart city without needing to buy properties there. The real estate laws for a Smart City must be such that investors will come in and provide rental residences to people who move in to stay there.

Phasing: A Greenfield Smart City must necessarily be built in phases on the basis of real demand, and demand should drive investments beyond the basics. Otherwise, we will wind up with ghost cities where infrastructure has been built, but with no takers.

Maintenance: Building a Greenfield city is relatively easy; however, it is continuous maintenance which differentiates a great city from the rest. Smart cities should be easy to maintain and be taken care of to extend, modify and accommodate the growing needs of citizens. Smart cities need to be smart for the long haul, not only at the outset.

To Summarize:
As much as the vision of Smart Cities in India is both vast and rational, their implementation within the context of existing socio-economic conditions might be a tad difficult. However, as a rapidly developing economy, the country must doubtlessly keep up with global standards. The execution of the Smart Cities plan can take India onto a major leap forward in the race of development, so no efforts must be spared to make them happen.