Read Full Story
Over the last two weeks, two reputed financial institutions downgraded India’s GDP growth for the second quarter (Jul-Sep) to a measly 4.2%. That was certainly unimaginable even a couple of years back. Of course, full year GDP estimates are still ranging between 5% and 6%, but that is more by way of conjecture at this point of time. For the September quarter, we have enough data points to indicate a weak GDP scenario. 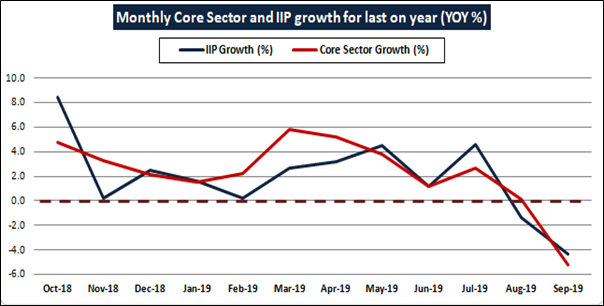 The chart captures the monthly movement of IIP (index of industrial production) and core sector growth over the last one year. The core sector growth is a combination of 8 key infrastructure related sectors and accounts for ~41% of the IIP. The chart clearly indicates a positive correlation and a sharp fall into negative territory in the last two months. Of course, the September GDP will be officially announced only on November 30th but the data points are quite disconcerting. How low could the second quarter GDP go and what should be the policy response?

Why GDP could trend lower in September quarter?

What is the policy response required?
The problems are well known and also adequately documented. The bigger challenge is the policy response. Here are the key challenges and the policy responses are critical if growth has to bounce back in the third and fourth quarters.
What India is seeing now is a fairly strange situation. After 10 years of easy money policy globally, most asset classes like equities and gold prices are at their life-time highs. Since Indian households have invested heavily in equity mutual funds and household gold holdings are worth $1.2 trillion, certainly a lot of wealth has been created. However, people are still very reluctant to spend due to uncertainty over the future. That is the cycle that the policy response needs to break. That would be the key to improved GDP in Q3 and Q4.