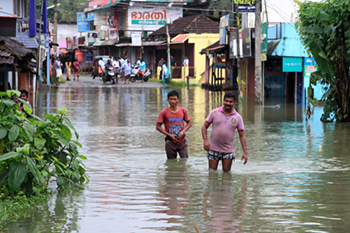 Kerala floods impact: stocks likely to be most impacted

Businesses are bound to take a hit in Kerala as flood waters recede. Companies that have a large presence in the state are likely to show impact in their Q2FY19 results.

According to Government data, Kerala accounted for less than 5% of India's Population and is a highly consumption-oriented state. The state has been affected the worst flood it has witnessed in a 100 years. Companies that have a large presence in flood-affected areas are likely to take a hit in their results for the upcoming quarter.

1. Ramco Cements: The company derives a majority of its business from Kerala and could be affected the most.

2. Marico: Kerala is one of the major states supplying the key raw material of copra, accounting for 30% of the company's supplies.

4. MRF and Rubfila: Natural rubber is a key raw material for these companies and is mainly sourced from Kerala.

5. V-GUARD: The company is headquartered in Kerala, and over half its business is from southern states.

6. Sheela Foam: Coir, a key raw material largely procured from Kerala, could be in short supply affecting the production cycle of the company.

7. Federal Bank and South Indian Bank: The banks derive 34% and 41% of their loans, respectively, from Kerala.

8. UBL and United Spirits: On 16th August, the Finance Minister of Kerala announced a hike in excise duty on liquor to raise additional funds for flood relief, affecting profitability of these companies.