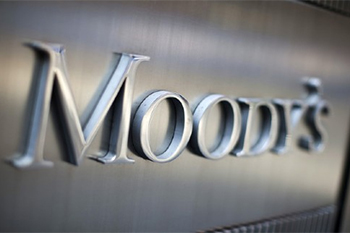 Moody’s lowers outlook; time to ponder, not to panic!

It may be recollected that back in 2017 Moody’s was the only international rating agency that had upgraded India’s rating from Baa3 to Baa2.

On Thursday the 07th of November, Moody’s lowered India’s rating outlook from “Stable” to “Negative”. It may be recollected that back in 2017 Moody’s was the only international rating agency that had upgraded India’s rating from Baa3 to Baa2. At that point, both S&P and Fitch had abstained from upgrading India’s ratings. In a way, this outlook downgrade by Moody’s has to be seen as a cautionary note on the original upgrade of 2017. At that time, Moody’s had pinned its optimism on speedy implementation of reforms and proper checks on the fiscal deficit. The latest lowering of outlook from stable to negative, must be seen more as a call to the Indian government to get its growth and its fiscal deficit back on track.

Moody’s has expressed concerns over the outlook for the Indian economy on a number of counts. Here are some key points that Moody’s has raised.

However, Finance Minister Nirmala Sitharaman has expressed optimism. According to a statement put out by the Finance Ministry, “Fundamentals of Indian economy are robust, inflation under check and bond yields low”. The Finance Ministry pointed out that the ingredients to take growth to the next level were certainly there. Nirmala Sitharaman added that, “the government had taken proactive policy decisions in response to the slowdown which include a sharp cut in corporate taxes, bigger rural allocation as well as an Rs25,000cr AIF allocations to rescue semi-finished homes.” The FM expressed the hope that these measures would have a salutary impact on the economy in the medium term.

Plenty of room for a counter cyclical approach

If one were to summarize the crux of the points raised by Moody’s’ in its outlook downgrade, it is in the shaded portion in the chart above. Since 2016, the GDP growth has been showing a steady fall while the fiscal deficit has been showing a steady rise. One of the concerns expressed by Moody’s is that with the corporate tax cuts, weak GST collections and slow growth, the GDP for fiscal 2019-20 could spill to above 3.7%.

That, in a way, would be a counter cyclical pump priming policy and Indian economy would be perfectly entitled to spend more to boost growth. Traditionally, fiscal policy is supposed to be counter cyclical. That means, the deficit should be allowed to spill over as long as it genuinely gives a boost to GDP growth. Getting overly obsessed with fiscal deficit control at a time when GDP growth is weak, really does not make a lot of economic sense.

However, there is one area that India must look at. While the above refers to central fiscal deficit, the actual deficit could be higher if you consider the state deficits. Also, much of India’s fiscal deficit tends to get parked in institutions like FCI and other PSUs. Even as the government pump primes the economy, this is one area to focus on. 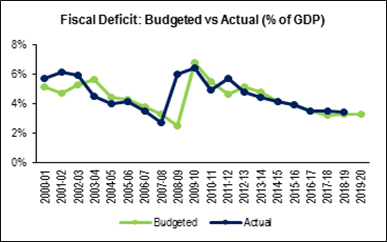 There has been a lot of concern expressed by rating agencies like Fitch and Moody’s about big spillover in the fiscal deficit this year. But if you look back at how India has handled deficits since 2001, spillages have been rare. In fact, the only big spillage was in 2008, but that was perfectly understandable considering that the entire world economy was in the midst of a financial crisis. Other than that, the fiscal deficit in India has been largely in line with the budget estimates.

Time to ponder, not to panic!
The fact that Moody’s has lowered the outlook but kept the rating at Baa2 only means that upgrades would not happen in the near future. But that would have, anyways, been optimistic at a time when India is doing a delicate economic balancing act. A lot of things could change once the artificial slowdown in the global economy is addressed by the trade truce. On the quantum of fiscal deficit, India surely has reasons to ponder; not to panic.