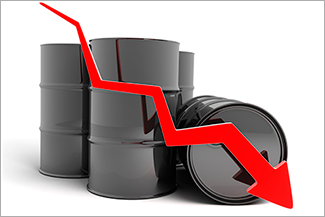 Oil's plight! Can cool towards US$60/bbl

Considering the scheme of things, we will not be surprised to see oil prices moving further lower till US$60/bbl.

It is simply unprecedented to witness a cartel refrain from exercising its authority to protect its interests. It appeared that OPEC defied the terminology of a cartel. The group which contributes around 40% of the global oil output could have easily acted in order to stem the recent rout in energy prices. In fact, OPEC at its recent group meeting decided to keep the production quota unchanged at 30mbpd, as large oil producing members expressed reluctance to cut output and opined that the markets will stabilize on its own. There was a divergence of opinion among the oil producing members of the cartel, where small producers like Venezuela and Algeria are worried about the recent rout in prices; nevertheless large producers are bracing for lower values in order to compete with growing non-OPEC output. The large producers had their say, as combined output of Saudi Arabia and Kuwait account for more than 40% of the total OPEC output. Oil prices bore the brunt of the same, with WTI and Brent values down by 31% and 36% respectively on YTD basis. To begin with, OPEC's laissez faire policy amid falling energy prices and oversupplied conditions seemed unfathomable. However, the concealed motive behind the inaction sounds reasonable. The story doing the rounds is that key producer like Saudi Arabia is intentionally bracing for lower oil prices as it wants to undermine US shale oil revolution, wherein producers will find it unviable to extract oil at such lower prices. Intent of the oil kingdom became clear when Saudis announced deeper price cuts for US customers, while hiking prices for Asian clients. Experts claim that about 50% of shale oil is uneconomical at the current prices. It will be interesting to see whether prolonged lower oil prices can bring a halt to the growth in the shale output.

OPEC is definitely not a quintessential cartel, where there is lack of trust among the members and there is no punitive measure for breaching the rules of the game. For instance, the cartel has been constantly producing oil well above the production quota of 30mbpd inspite of the fact that output in other nations was impacted by the turmoil in the Middle East. Most of the incremental growth in output has been contributed by none other than the swing producer Saudi Arabia. Saudis have maintained output around 9.5-10mbpd during the course of this year. Wealthy oil nations like Saudi Arabia, Kuwait and United Arab Emirates can produce oil amid much lower prices and hence withstand the difficult times. Although members like Venezuela, Nigeria and Iran are not comfortable with diminishing oil revenues, the big members has been successful in driving home the point of enduring the short term pain. The endeavor clearly is to regain the market share and OPEC is ready to battle it out. Although the interests of the individual members within the group are incompatible, OPEC as a group this time is looking at things in a different perspective. A production cutback would have translated in to higher prices; however it insidiously provides an encouragement to the competition (shale oil). Strategic acumen does not lie in boosting prices; it lies in destroying the opponent.

Meanwhile, Russia is also not ready to cut output as it cannot afford to do so. Moscow is largely reliant on the oil sales, which is the only source of boosting reserves. With increasing financial sanctions imposed by the western nations on Russia, Oil companies find it difficult to borrow from overseas markets. The only way for the oil companies is to produce more and monetize in order to meet the fresh capital requirements.

On outlook, comfortable global supply side equation will very much remain the rhetoric which the oil markets will dwell on. To a larger extent, markets have already priced in the supply/demand dynamics. However, the scenario is evolving as ever. With OPEC deciding to let the market forces determine the prices and the demand equation remaining weak across the globe (barring US), the bulls will very much remain on the defensive. OPEC will unlikely change its output levels until June next year, as it is projecting demand growth to be subdued next year. Considering the scheme of things, we will not be surprised to see oil prices moving further lower till US$60/bbl.