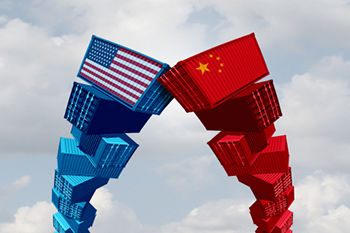 The long awaited Phase 1 of the trade deal did finally happen on January 15, 2020. Both the US and China have already clarified that this is only the first step and that the actual contours of the full deal will have to evolve over a period of time. However, the Phase 1 deal is likely to set the tone for the next phase. While Trump was personally involved in the deal, it was significant that Xi Jinping stayed away from participating in the signing of the deal. What does this deal mean for world markets and for India? But, first a quick look at what triggered the trade war and the urgency to sign the deal.

How the trade war started and how it looks to end?
The reasons for the beginning of the trade war are well documented. Donald Trump was unhappy with the huge trade deficits that the US was running with China and blamed it on government subsidies and weak intellectual property rights in China. To reverse this situation, the US started imposing penal tariffs on Chinese imports from March 2018 onwards. The following chart gives clarity. 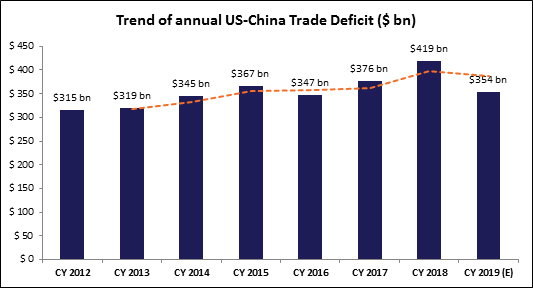 Despite the higher tariffs, US trade deficit shot up in 2018 but is estimated to come down sharply in 2019. While that would only mean status quo for the US, at least it looks like an optical victory for Trump. Also, being an election year, Trump cannot afford to allow US macros to weaken. At the same time, China has its own set of problems. Growth has been falling and industrial production has been slackening due to higher tariffs imposed by its largest market, the US. China already has a domestic debt and shadow banking problem to contend with and the last thing they needed was a weakening of growth. It was this combination of interests that triggered Phase 1 of the trade deal.

What does Phase 1 of the Trade Deal entail?
As the US and China have underscored, this is only the stepping stone for the subsequent phases of the deal. Here are the deal highlights.

What does this Phase 1 deal mean for world markets and India?

For the global markets, this will give hope that the two largest economies in the world are finally moving towards a truce. For India, the implications are numerous.

The only risk at this point of time is that the trade deal could push up oil prices. However, in the current scenario, with the US likely to increase its liquids output to 20 million bpd by Q4, any sharp spike in price looks unlikely. That could be the real good news for India!