x
Home » Top News » PSU Bank Merger: How big will be the impact? 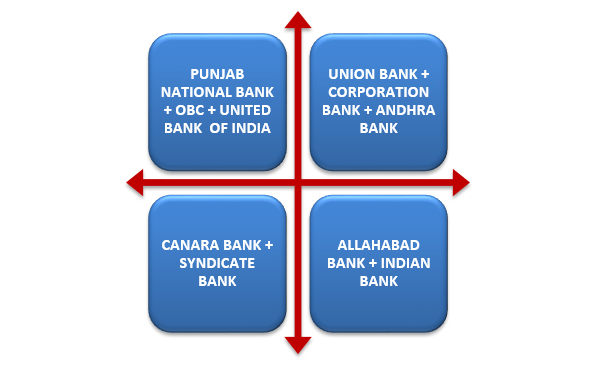 PSU Bank Merger: How big will be the impact?

Let us understand what could be the major implications of PSU Bank mergers.

Finance Minister, Nirmala Sitharaman, had already forewarned that something big was coming over the weekend. While the bank mergers were always expected, the alacrity with which the plan was announced with finer details was something worth noting. Essentially, by the end of the press conference, 10 PSU banks had shrunk to just 4. This is in addition to the previous consolidation that SBI and Bank of Baroda had gone through.

As can be seen from the above graphic, 10 PSU Banks have been shrunk into 4 with the stroke of a pen. Earlier, Vijaya Bank and Indian Overseas Bank had been merged into Bank of Baroda and prior to that all the subsidiaries of SBI had been fully integrated into the parent. There could be five major implications of this bank consolidation.

Rationalization of costs across banks
One of the major challenges across PSBs has been that recap and write-offs were unlikely to work if banks continued to have unwieldy cost structures. As the FM herself explained, the larger PSBs had a better control over costs but in case of smaller banks the cost issue ballooned because they did not have the scale to match up. While the FM has assured that there would not be any reduction in branches or in manpower, it appears to be highly unlikely. The very benefits of this merger exercise will stem from rationalizing the cost structures. This would include reducing the duplication of presence across geographies and relying more on shared support services like administration, HR and finance.

Providing greater heft to the treasury function
Globally, most banks use treasury as a clear profit centre and that is only possible if there is scale. Scale has a lot of advantages in treasury functions. When the bank is an influential player in the bond and currency markets, they have a better opportunity to get more competitive rates and quotes in the market. That has been one of the major advantages that SBI had enjoyed over the years. Most of the smaller banks did not have the treasury heft to compete with the biggest players in the business. This merger will allow them to merge their treasury operations and get better economies of scale in the process.

Improves capital adequacy and reduces the NPA ratio
Bank mergers have often been criticized on the lines that the merger of two weak banks could create a weaker bank. While practical hurdles will remain, the merger offers two distinct advantages. Firstly, the NPAs of a smaller bank tend to get magnified due to their small loan books. This merger with a much larger bank like PNB or Union Bank or even Canara Bank will ensure that the NPA ratio becomes tad more respectable. Even in terms of capital adequacy, it would have been much harder for all these banks to individually meet the Basel norms on capital adequacy.

Invest the costs saved on digital initiatives
The one area where PSBs really need to invest is in futuristic digital strategies. At a time when private banks are talking about seamless banking, touch-less banking and robotics, the PSBs cannot afford to remain far behind. One interesting piece of statistics best describes the power of low-cost digital strategies. Currently,  the market cap of HDFC Bank is more than the entire PSB segment put together. The only way the PSBs can get out of this groove is by investing heavily in digital strategies and using low-cost replication for business expansion. The merger will leave these combined entities with sufficient resources to re-allocate. That may be the biggest takeaway from bank mergers.

Having discussed the laudatory side of bank mergers, it would be appropriate to also look at the downside risks of this merger. Firstly, such a huge task will not be without union resistance. Bank unions are already opposing reduction of branches and rationalization of manpower. That would be economically essential but politically sensitive. Secondly, there is the bigger challenge of cultures and relative importance. The director of a smaller bank may have a much smaller role to play in a bigger set up. In a nutshell, the implementation is going to be a lot more challenging, but it is surely an initiative long overdue!