RBI may cut rates but beware of the Yuan googly

In India we do not have a credible market driven tool like the CME Fedwatch which captures probability of rate cuts on a real time basis. Instead, the RBI uses proxies like the rate of retail inflation (CPI inflation) and the growth rates.

In the last 3 monetary policies since February 2019, the Monetary Policy Committee (MPC) has cut repo rates by 25bps on each occasion. This has effectively reduced the benchmark rate from 6.50% to 5.75%. However, the MPC had hiked rates by 50bps between June 2018 and August 2018, leaving the net reduction in rates at just 25bps since last year.

In India we do not have a credible market driven tool like the CME Fedwatch which captures probability of rate cuts on a real time basis. Instead, the RBI uses proxies like the rate of retail inflation (CPI inflation) and the growth rates. In the last two policy statements of April and June 2019, there were two distinct shifts in the RBI approach. Firstly, RBI changed the stance of the monetary policy from neutral to accommodative hinting at a long term dovish approach to interest rates. Secondly, the minutes of the MPC discussions highlighted the bias of the committee shifting from inflation control to catalyzing growth. It is in this background that the 3rd monetary policy of the fiscal will be announced on August 07th.

How CPI inflation and IIP growth have panned out?

RBI rate decision is driven by the twin factors of CPI inflation and IIP growth. Of course, a lot of the growth focus did come back after the March quarter GDP came in sequentially lower at just 5.8% and full year GDP falling to 6.8%. For the current fiscal year, CRISIL has already lowered guidance to 6.90% GDP growth for the full year on domestic consumption and global trade worries. However, GDP data is quarterly and does not lend itself to monthly analysis. Hence, we use IIP as a proxy for growth.

The RBI has two principal objectives to its rate policy viz. inflation control and boosting growth. Let us look at inflation first. The RBI has traditionally been a stickler for price stability and has not been too keen to cut rates if inflation is headed higher. If you look at the CPI inflation chart over the last 1 year, it has consistently stayed below the RBI comfort zone of 4%. Among the 3 key baskets in the CPI, the fuel basket is likely to remain subdued due to weak crude prices. Food inflation is an area of concern but as long as it is leading to higher farm incomes, the government will not be overly worried. The big positive is that the core inflation has actually shown a downtrend in the last one year and that may be a good reason to cut rates.

Growth could be a more potent reason. With the trade war taking its toll on Indian exports, as seen in the 9% fall in June, the government needs to take the growth bull by the horns. The past experience has been that when lower rates are combined with ample liquidity, then it supports growth. That is what the RBI will count on in its August policy. Markets can be prepared for a 25bps rate cut with an outside possibility of 50bps rate cut.

A googly called the Chinese Yuan

On the August 05, 2019, two important events happened on the same day; albeit unrelated. The Indian government scrapped Article 370 and effectively made Jammu & Kashmir an integral part of India. At the same time, China, let the Chinese Yuan dip beyond CNY7/$ for the first time in the last 10 years in retaliation to the US tariff decision. 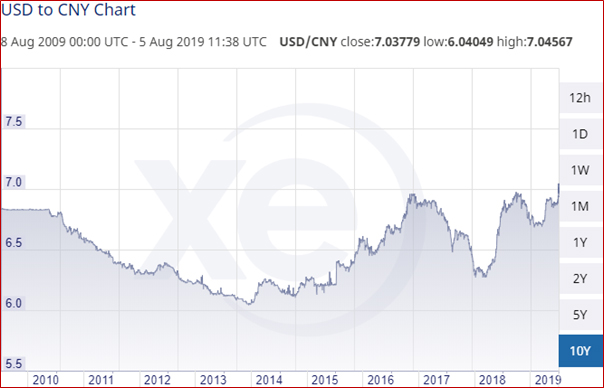 But, how is this chart relevant to the RBI policy? When the Yuan drops, all emerging markets (including India) will have no choice but to drop their currencies to stay competitive. We also saw the rupee dipping by nearly 1.4% on Monday. A cut in rates normally has the impact of weakening the rupee just as a hike in rates strengthens the rupee. The RBI may be wary of this fact (due to portfolio dependence). A 25bps rate cut, therefore, looks more likely than a 50bps rate cut by the RBI. More so, considering that the Fed also chose to restrict itself to just 25bps this time around! It is now over to the RBI policy!