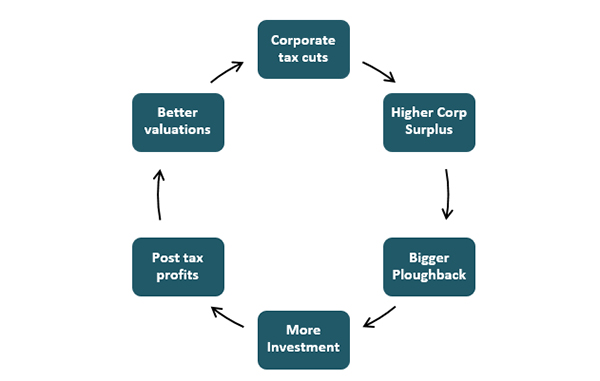 Stocks that could benefit from the FM’s tax bonanza

The combination of corporate tax cuts and GST cuts has opened up a plethora of interesting opportunities for investors, who are willing to stay put for the medium to long term. Let us see which stocks stand to benefit from the FM’s bonanza.

The Finance Minister started Friday with unprecedented cuts in corporate tax rates  and rounded it off with some targeted cuts in GST rates. Put together, they have pulled up the Sensex by almost 3,000 points and large cap heavyweights have rallied over 10-15% in a span of just 2 days. We are not even calculating the sentimental impact of “Howdy Modi”, but that we will leave for another day.

The total benefit, as professed by the government, is in the vicinity of Rs147,000cr or $20 billion. That is a lot of money because this will directly translate into earnings growth and downstream benefits in terms of investments. Here are 10 stocks that could see significant benefits from the tax cuts announced by the FM.

FMCG stocks may be unhappy that the GST on food products has not been reduced, but the tax breaks will make a big difference. Most FMCG companies pay high rates of taxes since they do not have too many investment tax shields. Also, FMCG stocks are the first to benefit from the downstream benefits of lower taxes leading to higher spending. Britannia and Nestle India could be interesting stocks to look at.

Will this be the much needed respite for auto stocks?

Auto stocks are among high tax payers in terms of effective taxation. For auto stocks, this could be a dual benefit. Firstly, the tax benefit will directly translate into bottom-line giving them the much needed respite in terms of cash flows. Secondly, auto stocks could also benefit from the secondary demand generated from higher corporate spending. One can look at stocks like Eicher, Bajaj Auto at these levels.

New business tax at 15% could trigger revival in capital cycle

Apart from the 22% concessional tax for all businesses in general, the FM also offered a special rate of 15% tax on new manufacturing facilities set up between October 2019 and March 2023. This will encourage a lot of capital investments and an obvious beneficiary of the revival in the capital cycle will be the capital goods sector. Capital cycle turned down in 2012 and has since been lagging. These tax incentives could just be the reason for the capital cycle to bounce back. Larsen & Toubro could be best poised to benefit in this case.

If the capital cycle picks, private banks will benefit too

In the last couple of days since the tax cuts were announced, the private banks have touched new highs. A heavyweight like HDFC Bank gained 15% in just two days. Private Banks may still largely be consumer lenders but their corporate loan books could see a rapid uptick from current levels. Banks like Kotak Bank with a strong corporate loan franchise could be the direct beneficiaries of these tax cuts.

The tax cuts are also expected to be positive for pick up in industrial credit as existing and new companies look to set up fresh capacities to leverage the 15% concessional tax facility. PSU banks have a strong franchise in industrial lending, especially to SME lending. While most PSU banks are still fighting their way out of the NPA menace, SBI could be the best poised to ride out the bottoming of the NPA cycle and a sharp anticipated pick-up in demand for credit from SMEs and larger corporates.

Demand for paints is largely derived demand and arises from 3 broad segments viz. industrial paints, decorative paints and automobiles. Industrial recovery and automobile growth could combine to put paint companies in a sweet spot. As the higher corporate spending translates into consumer demand, decorative paints too could attract attention. Asian Paints with its strong franchise in all the three segments could be the principal beneficiary of these order flows.

Second level infrastructure plays could be in the limelight

Time to pick some outperformers in Gems and Jewellery

For the traditional Gems and Jewellery (G&J) sector there are a series of advantages. Firstly,  the GST on job work in the diamond polishing industry has been cut from 5% to 1.5%. This should substantially reduce the cost of production. Also in the light of the weak performance of G&J exports, the GST Council chose to give it a boost by reducing the GST on semi precious stones from 3% to 0.25%. Rajesh Exports, one of the largest jewellery plays, should be a direct beneficiary of this favourable regime.

A face lift for the hospitality industry

For a long time hotel companies have struggled in India. Apart from competition from budget hotels, the frontline hotels also felt the pain of too much capital investments, limited occupancy and a long gestation. All that could change with the GST cuts announced. Now hotels with tariffs under Rs1,000 would not attract any GST. For tariffs between Rs1,000 and Rs7,500, the GST will be 12% and it will be 18% for tariffs above that. This brings the entire gamut of middle and upper-middle range rooms under a more reasonable price bracket. The reduction of GST on outdoor catering from 18% to 5% will also be a boost.

Finally, defence could emerge as an interesting play

In a small boost for the defence sector, the government has agreed to exempt the import of specialized defence equipment from the ambit of GST altogether. The condition must be that these must not be currently manufactured in India. This should be a good boost for quasi defence plays like Bharat Electronics, which enjoys reasonable pricing.

The combination of corporate tax cuts and GST cuts has opened up a plethora of interesting opportunities for investors, who are willing to stay put for the medium to long term.