x
Home » Top News » The AB who delivers like none other 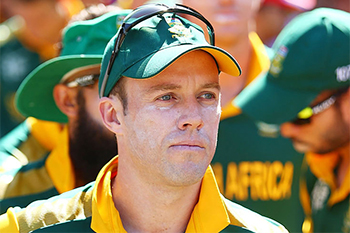 Hail him as the Next Bradman or call him the New Richards, his pristine talent is never devoid of his priceless temperament. One of the best students of his sport, AB de Villiers imparts many an invaluable life lesson for our benefit – whatever our passion, whatever our profession.

Drawing management lessons from the world of sport, literature, films and music is a lucrative industry for several consultants across the globe. With some exceptions, most of the roundabout analogies are laughably obvious and unabashedly clichéd, more to further their ‘advisory’ value prop than to enrich the half-wary audience with constructive takeaways. In the normal circumstances, it’s never recommended to indulge in this arm-chair indulgence.. But a few legends across spheres intuitively inspire us to document the credence and conviction of their professional and personal conduct. They don’t revel in the glamour of their trade; neither do they crave for devout fans, but there’s something astral about their character that invariably has our adulation and emulation travel together in the same compartment. Cricketer AB de Villiers is undoubtedly a top-notch sporting icon in this league.

At the peak of his career, deservedly adorned with enviable world records and top rankings, he’s one the most feared opponents in this edition of the World cup. No wonder, the Sri Lankan Prime Minister wants his national team ‘to keep an eye on him’ on the eve of their quarter final clash. No wonder, experts and commoners are busy comparing him to past legends. Bob Willis finds him better than Bradman; Dean Jones mocks Willis and places De Villiers next to Richards, several experts worldwide rate him higher than Tendulkar, Lara, Hammond, Hobbs, Hutton and Headley. Pace Master and close buddy Dale Steyn calls him the Neo of Matrix for his super-human powers. And there are some others who try and belittle his talent, who considering the flat Wanderers wicket as the real architect of his fastest ton in limited overs cricket. Oblivious of the commotion around him – positive and negative - the Proteas skipper - literally a protean in every respect – is simply enjoying his game, ball by ball, match after match.

So with that simple an approach, what does he teach us, one would ask? A lot actually…Rather than haul out palpable parallels from AB’s style, skill, sensitivity and sensibility under a hackneyed title like ‘Management lessons from AB’ replete with done to death sections like Teamwork, Leadership and Communication, it would be more fruitful to appreciate how his talent and temperament separate him from the other greats of the game. The learning should be best left to each one of us in the specific contexts of our workplace sphere – whether boardrooms, conference rooms, cabins, cubicles, stock exchanges, shop floors, assembly lines, classrooms or playgrounds. If we care to back ourselves like AB does, we can gainfully emulate him to enrich our personal and professional lives – we can learn how to envision the future, how to get ahead in life without getting ahead of ourselves, how to retain our poise even in the deafening noise of our meteoric rise, how to bring innovation to the everyday work zone, how to work around things when innovation is constricted, how to steer a project through clearly articulated and well orchestrated milestones, how to quickly come to terms with failure and how to carve a niche, yet never disregard the competition.

Talent
It’s apparent, even to a causal spectator, that AB possesses loads of talent. But it’s the incisive and innovative application, exactly in line with the need of the hour, is what makes him really special. Closely observe his optimal, 360 degree moves on the field  – both against spin and swing. They’re not flamboyant; they’re fit for purpose, focused on constructing a disciplined innings in all formats. The context is as important to him as the content. Fortified defense, coldblooded attack, fierce momentum or vigilant consolidation - trust him to do the job for his team without a fuss right from the word go and without the desperation of wild swings that are staple weapons for most batsmen of the T20 culture. And he’s a master at turning the most lethal of bowlers into nervous wrecks, without a trace of retribution or rancor. Stepping back paces, shuffling places, non-committal even in his apparently committed stance, he hoodwinks the bowler to convert his fervently proposed yorker into a low-full toss only to be scooped and sweeped for sixes over short-fine leg and down on one knee at that. The incensed bowler then tries to bowl straighter with the hope of disturbing the furniture behind, but now the apparent movement across the back foot makes way for a reverse sweep on the spur, thrashed to the boundary through the gully area. Cheeky dippers, nifty glances and mighty heaves – this man has all the arrows in his quiver, in line with the occasion. No wonder, he makes dot balls look like antique pieces and his contribution is all round. What if he’s not a mainline bowler, he still claims scalps with his throwing arm ability and behind the stumps agility.

Before you attribute his genius to his South African upbringing, marked by its deep-rooted multiple sporting culture and natural athleticism, consider how many of his counterparts keep their heads as still during rapid movements of intense moments and how many dare to take on the zooming ball lying so low (risking life-threatening injury in the process). Such is his confidence on the crease that even the best of bowlers freeze in the moment, not thinking of the apparent counter attacks like bowling a beamer when De Villiers is down on his knee. It’s not just the fear of the unfair field regulations; it’s the fear of this man.

The quality of innovation he brings to the modern-day limited over version is truly unparalleled. Maybe Michael Beaven’s crafty nudges, Sanath Jayasurya’s first-five over assaults or M S Dhoni’s astute marshalling of his limited bowling resources have been a few game changing contributions closer to AB’s league. An athletic and acrobatic version of India’s Sachin Tendulkar, he’s shouldering the responsibility of his nation with equally selfless authority. Like Sachin, he’s God sent for his nation’s cricketing cause but unlike Sachin, he’s not a demi god in his country. And very happy for not being one!

Temperament
A passionate proponent of team sport, AB chose cricket over rugby, football and hockey,, not to mention his proven talent in tennis, swimming and badminton. That explains why he’s one of the best gentlemen to represent the gentleman’s game. His conduct on and off the field provides a truckload of lessons for the Virat Kohlis of the world. Sledging from the opposition motivates him as much to do even better but he doesn’t advertise his tranquility from the rooftops, instead he quietly enjoys the respect he’s earned from his opposition as the one not to be messed with. And unlike most players of all times, he has no qualms in explicit appreciation of his opponents’ skills, whether they like it or not. Ask the ridiculously conceited Ricky Ponting and he’ll still not fathom the beauty of AB’s applause following his century. So will most Aussies (with the exception of McGrath who instinctively felt sorry for AB if not exactly shared his sentiment.) They are wholly incapable of such magnanimity and grace. Very few players from other countries can boast of AB’s blend of aptitude and attitude. And AB despite his proven credence will never boast.

For his phenomenal success strides, AB revels in quiet contemplation. Very much in the thick of action, he’s aware of the transient nature of the game. To quote him, “I know how this game works; it's not always nice to you. You never know when that bad patch is around the corner.”

We know how quickly our ferocious legends turn philosophical once they are past their prime, blabbering politically correct statements from the commentator’s box or churning out trashy sermons through umpteen columns in print. But how many of our legends would say something like this in their playing days “I've realized that, no matter how much success comes your way, you've still got to go home and be happy - with your wife, with your dog, with - hopefully - kids one day.” M S Dhoni says that but more as a matter of strategy than conviction. He would instead do well to study how AB addresses press conferences – candid as ever, quick to acknowledge blunders, the first to give credit to opposition, the first to acknowledge the contribution of peers and the advice of seniors like Kallis and Rhodes. That would help him do a much better job of crisis communication when the chips are down.