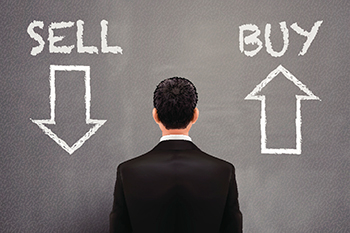 The most high profile deal during the month was L&T’s purchase of 3.25 crore shares of Mindtree worth Rs3,200cr from V G Siddhartha, the owner of Café Coffee Day Enterprises.

Large investors like FPIs, domestic mutual funds, insurance companies and HNIs buy and sell stocks for a variety of reasons. Any such deal above the threshold of 0.5% of the total capital of the target company gets reported in Daily Bulk Deals. Broadly, deals can be classified into FII deals, large shareholder deals and offloading deals. Let us look at some of the key deals that took place in the month of April 2019.

One of the major deals that happened in the month of April was on DLF, the realty company trying to become debt free. Government of Singapore, sold nearly 6.8 crore shares  with close to a third of the stake lapped up by Societe Generale of France. Government of Singapore has a major stake in DLF and has also taken a stake recently in its commercial property rental business. Morgan Stanley used the sharp bounce in Just Dial during the month of April to pare its positions in the counter and sold nearly 3.8 lakh shares.

Shifts in equity holdings during the month of April

The most high profile deal during the month was L&T’s purchase of 3.25 crore shares of Mindtree worth Rs3,200cr from V G Siddhartha, the owner of Café Coffee Day Enterprises. Siddhartha was looking to monetize his assets and his obvious target was his 20% stake in Mindtree, which he had picked up as an early investor in 1999. Siddhartha needed the money to reduce his debt and L&T saw it as an opportunity to expand its IT franchise. The battle for control is still on. Simultaneously, Jasmine Capital of Singapore sold a total of 35 lakh shares in Prestige Estates.

In another interesting deal, nearly 4.4 crore shares of Wipro, which were originally held by people who had later migrated to Pakistan or China, were held by the Custodian of Enemy Property, Government of India. This 1,150 crore sale by the government was largely lapped up by LIC with other institutions picking up smaller chunks. Finally, in a rather interesting deal, Fidelity Emerging Markets Fund picked up close to 30 lakh shares of S H Kelkar. The company has a leadership position in flavours and fragrances and has corrected over 50% in the last 2 years since listing.

Some desperate selling too was seen

The month of April also saw a number of companies under stress. Some names that immediately come to mind include Jet Airways, Zee group, RCOM and Reliance Capital. In fact, most of these shares saw some desperate selling either by shareholders or by financers. In the first instance of a financer selling shares, Axis Bank invoked the pledge on shares of Reliance Capital and sold over 1 crore shares pledged as security against loans taken. In a similar instance, IndusInd Bank also sold 1.75 crore shares of Reliance Communications, pledged with them as security.

Birla Mutual Fund sold nearly 8 lakh shares of Jet Airways as the price of the stock started plummeting. It is not clear whether this was an equity investment or NCDs by a Jet group company supported by a pledge on Jet shares. In another instance, Robecco Fund of the Netherlands sold over 25 lakh shares of Dewan Housing after the company saw a series of debt downgrades.

April has surely been an interesting month for markets. Most of these deals happened in a month when FPI flows were extremely robust.