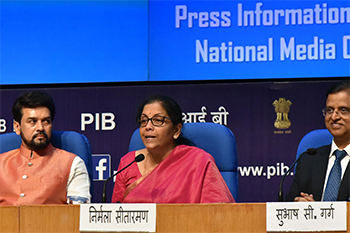 In this budget, the FM has spoken unequivocally about the aggressive GDP targets for India. The possibility of India touching $5 trillion GDP by 2025 and $10 trillion after 2030 was in itself quite enticing.

Nirmala Sitharaman spoke for a full 2 hours and 16 minutes, much longer than most FMs in the past have spoken. In typical pedagogic style, there were at least 30 occasions when she chose to repeat the point twice for greater effect and emphasis. That in a way marked her unique presentation style. In the past, Chidambaram’s budgets were marked by quotes from the famous Tamil poet, Thiruvalluvar, while Dr. Manmohan Singh would sprinkle his budget speeches with couplets in Urdu. The pedagogic style of emphasis was what marked the budget presentation of Sitharaman. But there was more to it. The budget also had some unique features. Here are few of them.

Being ambitious without being boastful

In this budget, the FM has spoken unequivocally about the aggressive GDP targets for India. The possibility of India touching $5 trillion GDP by 2025 and $10 trillion after 2030 was in itself quite enticing. Of course, we are assuming that the growth rate of 7-8% would be maintained but the FM has shown the courage to come out and speak out some really ambitious numbers.

While the budget has been rational in most parts, it has been quite clear about the tax arbitrage that buybacks were enjoying in the market. Dividends attracted 15% dividend distribution tax (DDT), while buybacks did not have any cost. But they both ended up rewarding shareholders, especially the larger shareholders. With capital gains taxed at 10%, the only arbitrage was the DDT. That has been plugged in this budget with the 20% tax on buybacks. That has certainly hit IT companies that ended up being major losers.

How about an increase in public shareholding?

This is still a matter of discussion so there was no need for the markets to react in panic. The finance minister will be asking SEBI and other stakeholders to explore if the public shareholding could be increased to 35% from the current 25%. This will increase the public float and make more paper available in the market. Of course, 1,400 companies have promoter holdings above 65% so all of them will have to divest shares. It is estimated that TCS and Wipro alone will have to sell shares to the tune of Rs75,000cr if the public ownership limit is increased. May we live in interesting times!

Time to play a little bit of Robin Hood

One of the big fears ahead of the Union Budget was that the Estate Duty could be re-introduced. That has been out of existence for nearly 35 years now. Instead, the FM decided to tax the wealthy a little more. So, if your annual income is above Rs2cr you pay 18% surcharge and if your income is above Rs5cr then you pay 25% surcharge. That may sound steep but the budget has surely played Robin Hood in this aspect. It is likely to substantially increase the effective rate of tax on HNIs.

That was the clear message from the finance minister. To support the NBFCs in the midst of a liquidity crunch, the FM has asked the banks to arrange a line of credit of up to Rs1 trillion. However, the government partial guarantee will only be available in case of strong and sound NBFCs that are facing a crisis of liquidity not of solvency. In addition, the budget also proposes to bring housing finance companies (HFCs) under the ambit of RBI regulation. The existing regulation by NHB was already creating a conflict of interest.

Boost to next generation technologies and entrepreneurs

The budget will go soft on Angel Tax where all filings and compliances have been done properly. To boost start-ups, the FM has also proposed to incubate 75,000 entrepreneurs who will create products, nurture ideas and generate jobs. MSMEs will get a boost in the form of 2% interest subvention and easier GST and tax compliance. Let us not forget technologies. EVs will attract lower GST of 5%, while import of equipment for EV manufacturing will be made duty free. People buying EVs can now claim income tax exemption of up to Rs1.50 lakh on the interest repayment.

A bigger canvas for NRIs to invest in India

NRIs have for long restricted themselves to bank deposits. FM has underlined that it was time to attract their risk capital. The NRI investments will now be brought under the same framework as the FPIs. The only risk here is the monitoring and compliance. In the past, such routes have been often misused and that is something the government may have to be careful about.