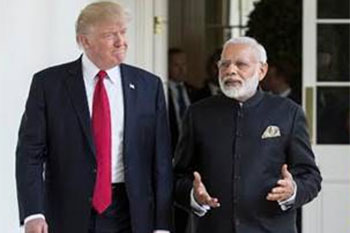 What the Trump impeachment effort means to Indian markets?

What exactly does an impeachment motion involve, how will it impact global markets and what does it mean for India?

What will the impeachment mean for the global markets?
If you observe the market volatility in the last few days, the impeachment trial is surely having an impact. That is evident in the market volatility. From a very short term perspective, this could have 3 implications. Firstly, the stock markets as well as the bond markets in the US and across the world could become extremely volatile. Look at the chart below that captures the volatility in the Dow on September 23, 2019. 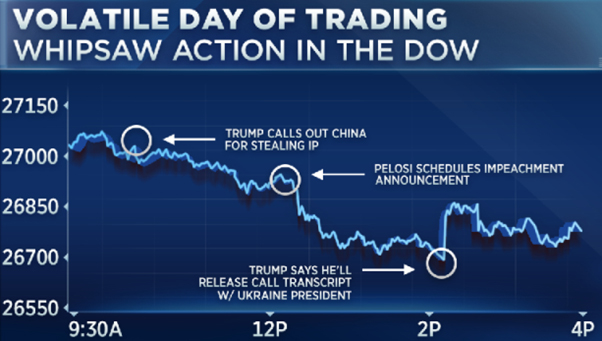 It is obvious that anything that puts Trump’s position at risk is not very well received by the markets. Secondly, there is the bigger allocation risk of investors preferring to go towards low risk assets like safe bonds, sturdy equities or even gold. This rapid re-allocation also adds to the volatility in the markets. Thirdly, till the time there is clarity on the impeachment process, no decision on the trade talks is likely to happen. That means, the overhang of the trade war on global growth continues and that is not great news for markets.

That is the impact in the very short term. But, as we have seen in the past, the impact of an impeachment motion lasts for a much longer period. Markets typically hate this period of uncertainty and that is reflected in the pricing of risk. To get a comparable scenario, let us look at how the markets reacted the last and only time the US president had to actually resign ahead of impeachment, i.e. Richard Nixon in 1974. 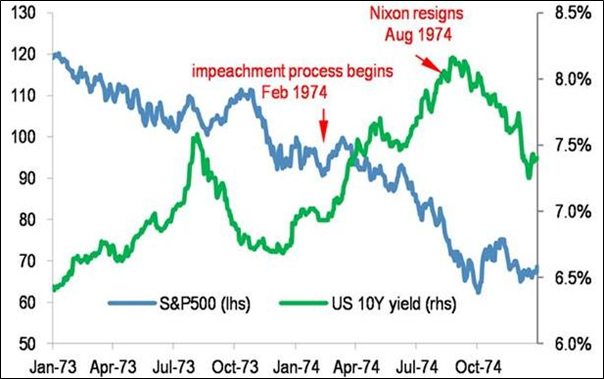 One can argue that the last instance of Nixon was 45 years back and markets have changed substantially since then. However, the underlying risk remains even today, at least going by the way global markets have reacted to impeachment stimuli.

What the impeachment means for the US and for India?

On the market and macro front, the impact is already visible. But, there are 3 key points to remember about the outcome.
For now, the big impeachment impact will be on volatility in equity and bond markets. Of course, gold may end up being the gainer!