Mid-term elections to the two principal houses of the US Congress viz. the Senate and the House are conducted every two years. In the year 2018, the mid-term elections became important considering Donald’s Trump’s controversial style.

First, a quick look at the how the US Congress style functions. All legislative powers are vested in the Congress of the United States, consisting of the Senate and House of Representatives. The House and Senate are equal partners in the legislative process, i.e., legislation cannot be enacted without the consent of both the chambers.

Further, the US Constitution has granted some unique powers to each of these chambers. The Senate ratifies treaties and approves presidential appointments, while the House initiates revenue-raising bills. The House initiates impeachment cases, while the Senate decides impeachment cases. A two-third vote of the Senate is required before the impeached person can be removed from office. Let us take a look at how the US mid-term election results panned out.

Pre-poll estimates had already estimated that the Democrats could gain a foothold in the House of Representatives and that is exactly what happened, as is evident from the table above. While Republicans continue to hold firm on to the Senate, they have lost the majority in the House of Representatives to the Democrats. This will put pressure on Trump and the Republican Party ahead of the next presidential elections in 2020.

In the aftermath of the mid-term election outcome, experts are anticipating a modest decline in US 10-year Treasury yields. The election outcome may reduce the hawkishness of the Fed and also the inflation-caused spending that Trump has been talking about. To that extent, the pressure on the RBI to hike rates in India to maintain the yield spread will be much lower. With tapering US bond yields, lower CPI inflation in India, and weak IIP growth, the RBI may now have a strong reason to put off any rate hike ideas till the February 2019 monetary policy.

What happens to the dollar and what it means for India?

The US dollar has been extremely strong in recent months, thanks to international trade tensions. Weakness in other currencies has automatically made the dollar stronger. With a Democrat win, a less hawkish monetary policy, and a gradual shift away from “America First” trade policies will mean dollar weakness. This will be good news for the Indian Rupee, which weakened from Rs64/$ to Rs74/$ in a span of just two months. With a tapering dollar, the pressure on the INR from importers and banks will reduce. It may also help the RBI to better manage its rupee support program.

Why the US stock markets are not too pleased 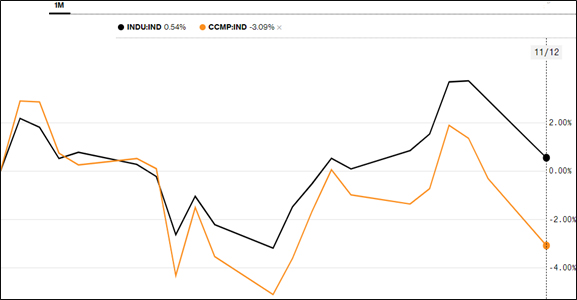 The market since the November 6th mid-term election outcome shows a sharp fall in the NASDAQ and the Dow. With the Democrats gaining control of the House, markets are wary that the second round of tax reform will be put on hold. The second round included making individual tax cuts permanent and adding incentives focused on retirement and business innovation.

Democrats, on the other hand, plan to raise corporate tax rates to 25% and reversing tax cuts for high-income Americans to pay for the $1tn infrastructure investment. Higher corporate taxes have generally been negative for stock markets and Indian markets could feel the heat in this case.

The big question is what happens to the trade war?

Most markets across the world have been negatively impacted by the trade war, either due to their dependence on the US or on China. The trade tariffs and other actions Trump implemented do not need congressional approval. While many of the legislations are already passed in this regard, one can expect a more reasonable approach to world trade as opposed to what Donald Trump has been indulging in. This could be a boost to world trade and help India’s cause of improving the exports.

What happens to Iran Sanctions?

The Iran sanctions went live on 5th November and the mid-term election results were announced on 6th November. Exactly, a day before the election results, Trump had offered across-the-board concessions to India, China, Japan, Korea, Turkey, and three more nations exemption from the Iran ban. This largely diluted the move and may have been the right strategy in retrospect. However, the victory of the Democrats may be a vote for greater free trade. Further, the Democrats may be less inclined towards unilateral sanctions against Iran. For India, which relies on Iran as its third largest supplier of crude, this may be good news. Of course, it will also result in lower crude oil prices, which will be a boost for the trade deficit.

Thus, for Indian markets, this outcome may by and large be good news as it sets greater checks and balances in the US political process. There may be concerns on slowing global growth, but there will be genuine improvement on the trade and currency front in the mid-term.