x
Home » Top News » Why is the Indian currency falling? 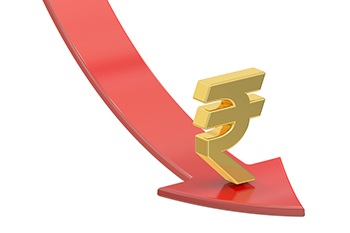 Why is the Indian currency falling?

The free-fall of the rupee continues; on a year-to-date basis, it has lost more than 13% against the US dollar and is among the worst-performing emerging market currencies.

The free-fall of the rupee continues; on a year-to-date basis, the Indian currency has lost more than 13% against the US dollar and is among the worst-performing emerging market currencies. Moreover, the country’s current account deficit (CAD) and the jobs data from the US recently came as a spoiler and added fuel to the fire.

1. Data released on September 07 shows that India's current account deficit widened to $15.8bn in the April-June quarter from a year ago due to a larger trade gap. It widened the most in five years and was at 2.4% of gross domestic product (GDP) in April-June vs. 1.9% of GDP in the January-March quarter. In fact, the merchandise trade deficit increased by 9% year-on-year (yoy) to $45.75bn in the first quarter of FY19 from $41.93bn over the same period a year ago. This helped drag the CAD sharply to the five-year low.

2. The US jobs data for August was proof of a healthy US labor market and indicated signs of wage inflation that could clear the way for the US Federal Reserve to hike interest rates at least twice this year. In fact, CME’s Fed Watch tool, a widely-used gauge of the Federal Open Market Committee’s (FOMC's) actions, showed that the probability of rate hikes by the US central bank in a year from now has increased sharply. A hike in global interest rates may also push the dollar higher. Hence, the increased probability of interest rate hikes coupled with a strong greenback would add to the pain of the already-battered emerging market currencies.

3. The perception of foreign investors about rupee assets also plays into non-deliverable forwards (NDF) betting. In the offshore markets, the three-month NDFs stood at around 73.07/$1 on Friday but rose to about 73.57/$1 by the time the Indian markets closed on Monday. A month ago, the NDFs were trading at 69.83/$1. So, the sentiment in the NDF markets coupled with a negative view on rupee assets was the reason behind the rupee’s massive fall.

4. Historical impact of general elections on rupee: The rupee has often depreciated against the dollar prior to the general elections. Since 1995, Lok Sabha elections have been held five times and the rupee weakened on four of these five occasions (plz refer table below). The only time it did the opposite was in 2004, when the BJP-led NDA coalition was in power.


Remarks
Whenever the Indian currency has depreciated, we have witnessed a decline in the midcap space. While IT and pharma gain, PSU oil marketing companies (OMCs) and aviation lose. In general, a 1% movement in the rupee vis-à-vis the dollar helps to increase margins by 25-50 basis points for domestic IT firms. For pharma companies, many companies derive 60-100% of their revenue from exports. The US is the key market for these companies and accounts for 32-50% of their revenue. So, sustained rupee depreciation will further boost their prospects.