Read Full Story
Research and development (R&D) in science and technology is at the core of economic growth. R&D leads to innovation and innovation in turn leads to economic growth. What exactly does R&D do? It allows scientists, technologists, and researchers to develop new methods, techniques, and knowledge points so as to enhance the quantity and quality of output with the same resources. A classic instance is that of shale oil drilling in the US over the last four years. Check the chart below: 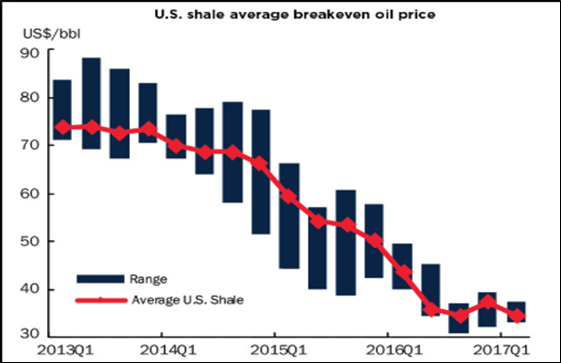 The chart shows how the shale breakeven has drastically reduced from $73/bbl to $35/bbl. This has enabled US oil drillers to be profitable even at lower price levels. How was this achieved? It was done through an iteration of process improvement via consistent investment in R&D. Today, shale wells in the US are able to frack a lot more oil out of each square-foot than ever before. That is the power of R&D.

Where does India’s R&D contribution come from?
R&D typically comes from two sources, that is, private R&D (which is what large companies in the area of pharma and electronics do) and public R&D (government exploration in defence, atomic energy, space, agriculture, etc.). Public R&D happens in areas where either monetization is most likely to happen over a longer period of time or where R&D cannot be left to the private sector for reasons of national security. Let us first see how the R&D spent in India is broken up in terms of spenders. 
As the above chart depicts, non-private R&D really takes the cake at 62% with the private sector and the industry contributing the balance. According to the survey conducted by the DST, India tops a list of 13 countries in terms of share of the public sector. These include the US, Russia, UK, Spain, Korea, Mexico, Japan, Italy, China, Germany, France, and Australia. Also over 80% of the R&D spending in India merely comes from marquee research agencies like DRDO, ISRO, ICAR, Department of Atomic Energy, CSIR etc.

How does India stack up in the global R&D game?

The above table captures the crux of the R&D challenge in India. Not only is the R&D spending in India low as a percentage of GDP but is also stagnated at the same level since 1996. During this period, not only large economies but also small economies from Eastern Europe and Central Asia are moving ahead in the R&D stakes.

A favourable R&D environment in India
India does have some advantages to encourage R&D to begin with. Firstly, with a burgeoning of the aspiring middle class, there is a huge market for a host of products. This should be a good starting point for innovation and R&D. Secondly, India boasts of a large pool of an English-speaking manpower, which is hard to find in most countries. That makes execution of R&D plans much easier. Lastly, the government has a catalytic R&D policy and the upgraded telecom infrastructure in India is at par with most nations.

There are adequate regulatory and tax incentives. In many cases, India offers R&D super deductions to the tune of 200%, which is at par with the best in the world. Secondly, from a direct tax perspective, R&D spending offers tax breaks and incentives for R&D contribution in the form of accelerated depreciation. Thirdly, there are also incentives for R&D in terms of indirect taxes. These include customs exemption for the import of specific goods for R&D, EPCG scheme application etc. In addition to the above central incentives, there are also additional state government incentives for R&D.

While the need for greater R&D spending is there, some practical challenges exist.