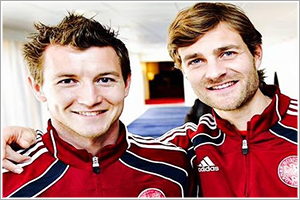 Morten Skoubo has over 15 years of experience playing in the very top leagues in European football.

Delhi Dynamos FC, the national capital’s Football Team for the Hero Indian Super League, announced the signing of Danish international strikers, Mads Junker and Morten Skoubo today. Both Junker and Skoubo have in the past excelled under the team’s coach, Harm Van Veldhoven, at Roda JC in the Dutch Eredivisie, and  share a great understanding which is critical for a strike partnership.

Mads Junker has scored over 130 goals at the highest level in European football. A true team player, he is tactically strong, and can play either as a #9 or a #10 in attack formation. Junker has been part of the Denmark national team setup from youth level onwards. He has featured in Euro Cup Qualifying games, and has even scored a goal against European powerhouse Germany in 2010. Junker has won the Danish Superliga and the Danish Cup with Brond by FC. A prolific goal scorer, he has scored 68 goals at the top level of Dutch football – a league that has boasted the likes of Robin Van Persie and Luis Suarez. In fact, in Luis Suarez’s record breaking 2009-10 season (35 goals), Junker scored 21 goals in the Eredevisie.

Morten Skoubo has over 15 years of experience playing in the very top leagues in European football. Tall and physically strong, Skoubo has great heading ability. He is one of the few players who can boast of experience in most of the major leagues in Europe including England, Spain, Germany and Netherlands. Commanding 5.46 Mn. GBP in career transfer fees, Skoubo has featured for Real Sociedad in Spain, West Brom in England and Borussia Mönchengladbach in Germany. During the 2005-06 season, Skoubo scored 5 goals in La Liga, 3 goals in the UEFA Cup, as well as a goal in Champions League Qualifying. In February 2006, he scored the fifth fastest goal in La Liga history in just 11 seconds against Valencia. Skoubo has been part of the Denmark national team setup at both U21 and senior levels.

With the two international strikers coming on board, this is another major step for Delhi Dynamos FC as they continue with the process of building a world-class team for the inaugural session of Hero Indian Super League. With an experienced coach in Harm and an alliance with Dutch powerhouse Feyenoord Rotterdam, Delhi Dynamos is working towards its mission of building a strong, credible team and developing football into a leading sport across Delhi and Northern India.

Piyush Goyal, Head New Initiatives DEN Networks and Director DEN Soccer said: “We are extremely pleased to have Mads Junker and Morten Skoubo in the Delhi team, they have rich and extensive experience of playing at the top level in the world of professional football. We are confident that the two players will form a great strike partnership for the club, steer Delhi Dynamos to the top, and give Delhi fans a lot to cheer about during the tournament.”

Harm van Veldhoven, Coach, Delhi Dynamos FC; said: “It’s great to coach Morten and Mads again, who are key acquisitions for us. It is our endeavour to have talented & experienced players to build a strong team. Given their energy, experience and mutual understanding, I am confident that the two strikers will produce an exciting brand of attacking football, which will enable the Delhi Dynamos’ to achieve its mission of “Thok Denge Goal.”

Largest Subscriber Base amongst all Cable Players in India

DEN Networks Limited is India's largest cable TV distribution company serving 13 million homes in over 200 cities. The company has been a frontrunner in the digitisation of Indian cable television and has approximately 6 million digital subscribers.

DEN has soft launched its super-fast cable broadband internet services on DOCSIS 3.0 technology. The offering offers plans up to speeds of 100 Mbps. The commercial launch of service is scheduled for September 2014.

DEN is the proud owner of the Indian Super League’s Delhi Team – Delhi Dynamos FC. DEN aims to create a robust football ecosystem in Delhi & Northern Indian. Delhi Dynamos has an alliance with Feyenoord Rotterdam – a leading football club & academy from the Netherlands. According to the CIES Football Observatory, Feyenoord is the World No. 1 in Player Development for this FIFA World Cup 2014.

With the introduction of Delhi Dynamos FC, DEN aims to become the default destination for entertainment, information and interactivity for the Indian family.