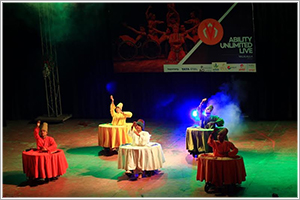 The extravaganza flagged off with the Ability Unlimited Concert by differently abled artistes on Friday evening.

Remaining true to its character - a fun fest with a social conscience, ‘Valhalla 2014’ collected an amount of Rs. 2 lakhs for the cause of the Ability Unlimited Foundation (AUF), a Delhi based foundation working for differently-abled people.

“Valhalla, unlike any other cultural fest is an instrument of change, standing by the founding values of XLRI – ‘For the Greater Good’. Proceeds from the fest will go to the Ability Unlimited Foundation (AUF), a Delhi based foundation which is doing truly commendable work in reaching out to differently-abled citizens of all ages right from providing them all amenities, education, vocational training and meaningful opportunities to earn their livelihoods”, said Ayan Guha, member of Valhalla Core Team of XLRI.

The extravaganza flagged off with the Ability Unlimited Concert by differently abled artistes on Friday evening. About 12 artistes enthralled the audience with scintillating performances on wheel chairs. As part of Valhalla’s mission to inspire the young sparks of the nation, XLRI had invited students from various schools from across the city to witness this noble initiative and also organized a painting competition across these schools on the theme “Celebrating Contrasts” to commemorate the spirit of Valhalla.

The Second Day of the event witnessed various sporting competitions besides Quest Adventura, an event for adventure enthusiasts where, participants enjoyed various adventure sports such as rappelling, plank race, rope climbing etc. Other competitions held on the Day -2 were the Inter-B-School Debate and the ‘SpEnt Quiz’ - sports and entertainment quiz.

To keep the cultural element of the festival alive, a Tribal Music Workshop was hosted along with a solo singing competition saw a huge turnout both in terms of active participation and support. The star attraction of the day was the Pro Show- beautiful and energetic performances from Swarathma and Underground Authority that left the crowdd wanting for more.

The final day of Valhalla 2014 commenced with the 6th Annual Jamshedpur Run which was one of the foremost events of Valhalla 2014. The mini marathon, conducted by the CII-YI Net of XLRI to sensitize people towards the differently abled witnessed  participation of people from all walks of life - school and college students, faculty members, industry experts, dignitaries, and students from top B-schools – XLRI, IIMs, MDI, XIMB, and SIBM and citizens. The run was flagged of by ace Indian mountaineer Padma Premlata Agarwal and cricketer Saurabh Tiwary.

XLRI emerged as overall winners in majority of the sports events of the inter-B-School competition and XIMB emerged as the first runners up.

The event has been supported by Tata Steel, SpiceJet, Airtel, SBI & PepsiCo.

JSW Energy board approves allotment of NCDs worth Rs250 crore

Zydus gets USFDA final approval for Sildenafil for Oral Suspension