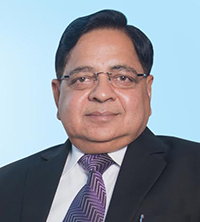 "We expect the industry to have 10-12% growth in normal monsoon conditions. Dhanuka will have a growth of 18-20% in a normal monsoon."

M. K. Dhanuka, MD, Dhanuka Agritech Ltd, holds a Bachelor’s Degree in Commerce from Shri Ram College of Commerce, Delhi University. He is the Managing Director of Dhanuka Agritech Limited and has a vast experience of 40 years in the Agrochemical industry. His knowledge of Finance and multi-faceted experience lends him with the much needed expertise in areas that are necessary for effective functioning of the Board and Committees.

Dhanuka Agritech Limited manufactures a wide range of farm input products to support farmers in their pursuit for better crop yield. The company has a pan-India presence with marketing offices in all major states in India. It has a network of more than 8,600 distributors and dealers catering to more than 80,000 retailers across India and has a reach spanning more than 10 million farmers. It has technical tie-ups with four American and four Japanese companies. Dhanuka Agritech figures among the top five companies in India in brand sales. With more than 200 registrations and 500 active SKUs, the company has one of the largest market penetrations. Dhanuka Agritech has 30 offices across India and 45 warehouses.

Replying to Yash Ved of IIFL, M. K. Dhanuka says "We expect the industry to have 10-12% growth in normal monsoon conditions. Dhanuka will have a growth of 18-20% in a normal monsoon."

The company's turnover for the quarter was at Rs.297.94 crores as against Rs.305.93 crores for the same period last year.

For the first six months of this fiscal, the company recorded a turnover of Rs. 508.94 crores as against Rs.505.17 crores in the corresponding period last year. Company reported a net profit of Rs. 56.28 crores for the six months ended September 30, 2015 as compared to Rs.62.18 crores in the same period in the previous fiscal.

Since Dhanuka is growing at a pace of 13.95% in its bottomline in FY15 over FY14, we need more capacity to meet the market requirement.

We are confident that after coming up with this new facility at Keshwana, the balance sheet size will further improve and there will be good growth in topline and bottomline.

What outlook do you see for the Agro chemical Industry?
We expect the industry to have a 10-12% growth in normal monsoon conditions. Dhanuka will have a growth of 18-20 % subject to a normal monsoon.

Brief us about the business highlights for the quarter?
Due to rainfall deficit and low commodity prices, the agro chemical industry has contracted in the first half of this fiscal. Dhanuka has shown better results compared with the industry average. We expect Rabi crop to have a positive impact.

Do you expect any improvement in EBITDA margins?
We are well positioned to unlock our growth potential and are excited about introducing new products.

Once the volume of new 9(3) molecules will scale up, Dhanuka expects improvement of a few bps in EBITDA margins.

How many products are you planning to launch for the current fiscal?
Dhanuka is proud to have one of the highest foreign collaborations among Indian agrochemical companies, namely with four American and four Japanese companies.

Dhanuka is tying up with DuPont to collaborate with its highest selling insecticide Rynaxypyr in India under Dhanuka’s Brand name “Cover”, which is used mainly in granule form on paddy and sugarcane and liquid form on vegetables and horticulture crops.

The company has also got approval for “Conika”, a new 9(3) fungicide, which is from Hokko Chemicals, Japan to be launched in this fiscal.

Dhanuka has recently launched SEMPRA, a unique weedicide for Cyperus Rotundus control in sugarcane. Sempra is introduced by Dhanuka through a tie-up with Nissan Chemicals, Japan.

A new 9(3) weedicide “ Sakura” was also launched recently for the control of weeds in soybean. This product is also from Nissan Chemicals, Japan.

Dhanuka hopes to launch two new 9(3) molecules every year in addition to the introduction of two to three molecules under 9(4).

Comment on your Capex plans?
The company has three manufacturing units located at Gurgaon (Haryana), Sanand (Gujarat), and Udhampur (J&K). It is setting up a fourth unit at Rajasthan to double its current manufacturing capacities for liquids and powder formulations.

The construction is in full swing and the plant will likely become operational by the end of FY15-16. Estimated investment is close to Rs. 60 crores, which will likely be met from internal accruals.

This capacity is expected to generate revenues to the tune of Rs 500 crores.

What is your revenue target for the current fiscal?
Dhanuka hopes to achieve 7-8% revenue growth by the end of this fiscal.

What is your market share?
We have 6% market share in pesticide formulations in the domestic brand sales business.