x
Home » Top News » How to use Gann indicators in stock markets? 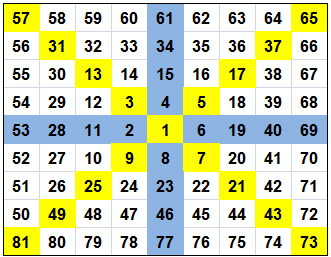 How to use Gann indicators in stock markets?

Gann indicators are normally considered to be a lot more about mathematics and less about charts and technicals.

Gann indicators are normally considered to be a lot more about mathematics and less about charts and technicals. However, Gann indicators have been used quite extensively in identifying opportunities in the stock markets, both at the index level and the stock level. Let us first understand the concept of Gann and the logic behind the Gann indicators.

What is the basis of Gann theory?

The above square is called the Gann square or the Gann Master Chart and is the basis of Gann based trading. This is not a random chart but is the number system that is created through concentric squares. See where the number 1 starts right at the centre and then gradually that pattern is followed all the way up to 81 where the 9X9 square ends. While this has been depicted for just 81 squares, you can expand it to 144 squares and so on. Essentially, if you look at the pattern of the consecutive numbers, it forms a spiral all the way from 1 to 81 with each spiral forming concentric squares/circles. The logical movement from 1 to 81 is in a clock-wise fashion.

In the entire Gann Square, it is the numbers on the cross and the diagonals that are really important from a forecasting point of view. For example, since the Gann Square is a perfect square it can also be represented as a circle that perfectly circumscribes the four corners of a square. Once that is done, the entire Gann Square is broken up into 8 equal parts of 45 degrees each. Since the circle has an angle of 360 degrees, each sector of 45 degrees will constitute one angle for the Gann Analysis. From a price and time forecasting point of view, the two most important lines are the Cardinal Cross and the Ordinal Cross. Let us focus on this Cardinal Cross and the Ordinal Cross more closely.

In the above Gann Square of 9X9 what are the important numbers from an analytical perspective? They are as follows:
In the above chart, the blue lines represent the Cardinal Cross and the yellow lines represent the Ordinal Cross. They are next in importance and represent the important supports and resistance levels for stocks. Effectively, the numbers along the blue line (cardinal cross) represent the strong supports and resistances, while the numbers along the yellow line (ordinal cross) represent the strong supports, which are liable to be breached.
Some practical rules of W.D. Gann that can be applied
In terms of application, Gann theory can be used to trace and interpret 3 kinds of distinct patterns. These include Time Study, Price Study and Pattern Study. While the applicability of the Gann approach by itself is doubtful, it is a very important step in understanding patterns in trading.

Praj Industries' stock price up by more than 7% today