Read Full Story
When we talk of bond yields, we are basically referring to yield to maturity (YTM). Remember, YTM is different from the interest rate on the bond, which remains static. If a bond with a face value of Rs1,000 is paying 8% interest and if the interest rates go up in the market then the price of the bond will come below Rs1,000. As a result, the YTM will become more than 8%. The bond price moves to adjust the YTM to the shifts in interest rates. Consider the following table for a bond maturing in 5 years.

After briefly crossing the psychological mark of 8% yields in the month of June, the yields have retreated now and are reflecting a more normalized scenario in the bond markets. While yields went up in June on the back of panic on the crude oil and the inflation front, the RBI June policy did help matters. By hiking the repo rates by 25bps in June policy, the RBI has given a hint of shift in its stance. The rate hike will absorb some of the pressure on the rupee and that has also helped to temper the bond yields.

Lower H1 borrowings and dovish monetary policy explain this fall in yields
Between June and mid July 2018 there were key developments that led to the lower bond yields on the benchmark 10-year. Firstly, the H1 borrowings target which set lower at Rs2,88,000cr (23% lower) has been respected. Secondly, the June monetary policy has hiked rates by 25bps and absorbed some of the pain of higher crude prices and weaker rupee. Let us understand both these points inter-play. 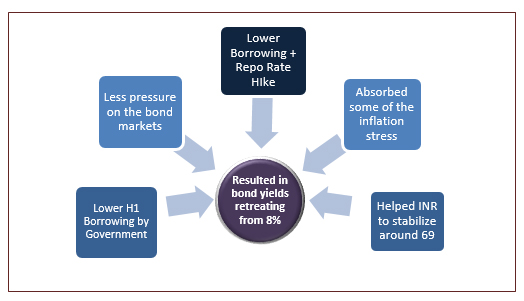 Rates were hiked without becoming hawkish
When the Monetary Policy Committee (MPC) announced its monetary policy in early June, it was clear that the rate hike was purely meant to absorb temporary macro pressures. It meant that the RBI did not see reasons to hike repo rates unless the data really warranted. That was seen as a positive signal as markets were wary that RBI could consider a series of rate hikes during the year. However, it now looks like the RBI may at best look at one more rate hike in this calendar year, which is something the markets can surely absorb.

The final word on this subject may not have been said. The ultimate outcome of the entire bond yield debate will depend on the monsoons, Kharif output, and food inflation and of course, how the US Federal Reserve works out its rates trajectory. That is still awaited!