The recent rally in the Bank Nifty from the trough of 8995 levels has stalled near the resistance line of the triangle pattern. Repeated attempts of a breakout beyond the bearish resistance line have led to a trend reversal pattern in the form of ‘Pentagon Top’. Similar ‘Pentagon Top’ was visible in the S&P CNX Nifty when it peaked out in May 2011 but then witnessed a sharp fall. In the current scenario, a break below 9300 levels is unlikely as the Bank Nifty could consolidate in the range of 9300 and 9600 thereafter.

Earlier, a rally in the Nifty was led by the Bank Nifty but with decelerating signals from momentum oscillators in the Bank Nifty, sustenance of the advance in Nifty beyond 5250 seems unlikely.

So far, the Bank Nifty has managed to retrace nearly 61.8% of the previous down move, but it has not attempted to move beyond the 78.6% mark, which is a cause for concern. In April- May 2011, the ‘Pentagon Top’ appeared in the retracement zone of 61.8%-78.6%, which is also visible this time. Inability to sustain above 10,281 would mean prices can move lower towards 9400, which is the support line of the larger triangle.

On weekly candlestick chart, there has not been any significant follow-up buying despite ‘Bullish Belt Hold’ pattern, which acted as a major bullish reversal during early June. Formations of a ‘Doji Star’ followed by a ‘Hanging Man’ raises the probability of negation of the current intermediate upswing.

Our medium-term negative view would be negated in case the Bank Nifty manages to form a higher high above 10,645. To make the risk-reward ratio more favorable ‘Put bear spread’ would be an ideal strategy. 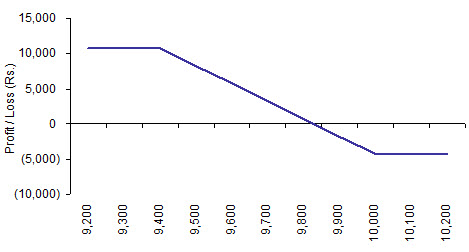