x
Home » Top News » What is a promissory note? 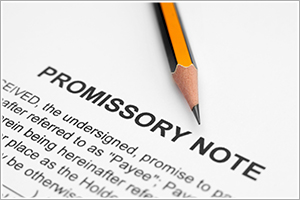 What is a promissory note?

All of us know what does the term 'loan or debt' mean. A loan is a debt evidenced by an agreement which specifies, among other things, the principal amount, interest rate and date of repayment.

In a loan, the borrower initially receives or borrows an amount of money, called the principal, from the lender, and is obligated to pay back or repay an equal amount of money to the lender at a later time. Typically, the money is paid back in regular installments, or partial repayments; in an annuity, each installment is the same amount. The below write-up provides details about a promissory note.

Promissory note is a written promise to pay a debt. It is a financial instrument, in which one party (maker or issuer) promises in writing to pay a determinate sum of money to the other (the payee), either at a fixed, determinable future time or on demand of the payee subject to specific terms.

The terms of a note usually include the principal amount, the interest rate (if any), the parties, date, terms of repayment (which could include interest) and the maturity date. Sometimes, provisions are included concerning the payee's rights in the event of a default, which may include foreclosure of the maker's assets.

If your home is used for security and you default on the promissory note, you could lose your home. Most promissory notes attached to property are secured by either a trust deed, also known as a deed of trust, a mortgage or a land contract, and those instruments are recorded in the public records. Promissory notes are often unrecorded.

Terms, such as "loan", "loan agreement", and "loan contract" may be used interchangeably with "promissory note" but these terms do not have the same legal meaning.