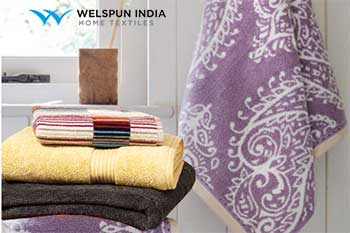 Welspun India has received board of directors approval for the plan to augment towel manufacturing capacity by ~20% i.e., 16,600MTPA at Anjar from 85,400 MTPA to 102,000MTPA to meet the growing demand from the overseas customers.

In its regulatory filing, Welspun India said that keeping in view the recent trend of customers focus to track the entire value chain i.e., “Farm to Shelf”, the Board has approved an investment in 40 looms for towel fabric at Anjar which represents ~7% of installed capacity.

Also, at Vapi, Rugs capacity expansion by 80%, which commenced during the last financial year, the Board has approved additional investment relating to automation for faster production turnaround at a lower cost.

Welspun India plans to invest Rs656.5cr for the expansion during  FY22 and FY23. The company expects the benefits of these expansions to start accruing in phases from the first quarter of FY23 onwards.

Welspun India believes that this expansion has a revenue potential of Rs1,207cr from the second year of operation.

Furthermore, Welspun India's wholly-owned subsidiary, Welspun Flooring has received board approval for CAPEX of Rs143.6cr to be invested over FY22 and FY23, for de-bottlenecking and rebalancing of its facility at Telangana, including setting up of a 25MW Renewable Energy Power Plant for uninterrupted power supply at lower cost and to further the Group’s commitment towards ESG by embedding sustainability and circularity at every stage of its value chain.

Overall, the company will make more than 800cr investment for the above capacity enhancement over FY22 and FY23.