The Reserve Bank of India (RBI), on March 27, 2014, has extended the transitional period for full implementation of Basel III Regulations in India by one year from March 31, 2018 to March 31, 2019, closer to the internationally agreed date of January 1, 2019. RBI’s move provides short term breather to banks (specifically public sector banks or PSBs) facing challenge of raising tier I capital to meet Basel III norms. In addition, RBI has also tightened the loss absorption features of non-equity capital instruments which is expected to strengthen protection provided to depositors /other senior Debt holders, but could reduce investor appetite for these instruments, which in any case is not yet tested well in Indian markets so far.

The key impact of RBI’s revised norms is covered in following bullets:

RBI has extended the implementation schedule for Capital Conservation Buffer (CCB) by one year from FY2015-FY2018 to FY2016-FY2019 consequently the Basel III Capital Regulations will be fully implemented as on March 31, 2019, now closer to the internationally agreed date of January 1, 2019, as against earlier timeline of March 31, 2018. The earlier and revised schedule is as follows:

In ICRA’s estimate, as on December 31, 2013, PSBs had reported Basel III CRAR of 11.1% and Tier I capital of 8.1%, the corresponding figures for private banks were 15.1% and 11.3%, indicating banks may be able to meet the norms quite easily in the short term. However, Tier I for most PSBs is lower than 9.5% required at the end of transition period. Further, significant differences do exist between PSBs with minimum Tier I for a public sector bank at 5.6% as on December 2013, indicating some of the banks may need to mobilize significant capital in the short term as well even to meet the relaxed norms. Further, as PSBs current capitalization levels and internal capital generation have been significantly lower than their private counterparts, the capital requirement remains bigger challenge for PSBs as compared to private banks. 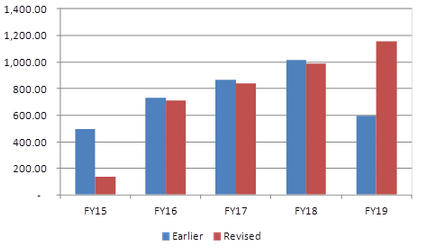 PSBs needed CET1 capital of Rs. 2-2.2 trillion and AT1 capital of Rs. 1.3-1.4 trillion during FY2015-FY2018 (as per earlier norms), as per revised schedule PSBs CET1 & AT1 capital requirement would be marginally higher at Rs 2.5-2.7 trillion and Rs 1.4-1.5 trillion respectively during FY2015-FY2019. However the extension of CCB implementation provides short-term breather whereby PSBs tier I capital requirement for FY2015 reduces to less than Rs 150 billion as against earlier requirement of Rs 200-450 billion, against which Government of India (GoI) has budgeted Rs 110 billion.

Notwithstanding, the short term breather, RBI has emphasized that banks need to improve and strengthen their capital planning processes, Board of banks should actively engage in the capital planning process and oversee its implementation to avoid last minute rush for capital raising. In ICRA’s views, banks could opt to mobilize capital larger than minimum required as per Basel III Regulations in initial years of implementation, as minimum capital requirement in later years is much higher however same would also depend on investor appetite and capital market conditions.

As per earlier norms, RBI prescribed that coupons/dividends on non-equity tier I capital instruments must be paid out of distributable items; now RBI has clarified that dividend on common shares and perpetual non-cumulative preference shares will be paid out of current year’s profit only. Also, coupon payment on perpetual debt instrument (PDI) would be paid to the extent of available profit in the current year; thus banks would not be able to use distributable reserves pertaining to previous years to make coupons/dividends payment on non-equity tier I capital instruments in years of net losses. These restriction are likely to have a positive impact on capital conservation, however restrictions on coupon on ATI instruments, could reduce the investor appetite, as probability of missed coupon goes up and any missed coupon is a permanent loss to the investors, as the coupon is non cumulative in nature.

Overall, although RBI has given a short term breather to PSBs, it has clearly asked the banks to be proactive in capital management to avoid last minute rush. As there is no relief on overall capital requirement on full implementation of Basel III norms, capital would remain a big challenge for PSBs; PSBs Tier I capital requirement for Basel III and for growth during FY15-FY19 remains relatively large at 120-135% of their current market capitalization. Thus, the improvement in investor sentiment as well as development of Additional Tier 1 capital instruments market would be critical for meeting the huge capital requirement. As private sector banks are better capitalized, have better internal capital generation and enjoy better valuations, Tier I capital requirement looks less daunting at 25-30% of their current market capitalization. As for other changes, lowering of pre-specified trigger may lower probability of default in the transition period; while other restrictions could lead to better capital conservation in the event of stress.