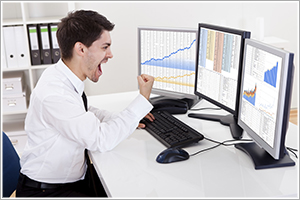 BSE Energy hit a new record high on Monday led by outperformance in heavyweight Reliance Industries (RIL) stock. The index has jumped by at least 2.5% so far today with a new 52-week high of 7704.27.

Even though the index had 12 scrips on the advance side and 11 scrips on the decline front, yet gains arising from RIL offset the losses from major oil, gas, energy and metal companies.

Alphageo was the top gainer skyrocketing by more than 12%. The stock has touched a new 52-week high of Rs395.20 per piece earlier today.

GMDC and Chennai Petroleum Corp followed by surging more than 3% and 2%.

RIL also traded higher by 2.3%. However, the stock has touched a new 52-week high of Rs2479.85 per piece with gains of at least 4% so far today. RIL is the most valued company on the stock exchanges.

On the contrary, Adani Total Gas was the top bear of the index plunging 3.2% followed by HPCL tumbling 2.2%. Gujarat Gas slipped nearly 2%.

Oil India, ONGC and Indian Oil dived more than 1% each. While Coal India and Petronet LNG dipped 0.8% each. MRPL and Aegis Logistics dropped 0.7% and 0.5%.

In the latest development, the sector is focused after the data from the Controller General of Accounts in the Union Ministry of Finance highlighted that the government's excise duty collection stood more than Rs1 lakh cr between April - July 2021, rising by 48% from the collection of Rs67,895cr in the corresponding period of the previous year.

Further, investors were optimistic on the index after the RIL chief Mukesh Ambani, at the International Climate Summit 2021, said that India’s energy needs will increase exponentially as the country's economic growth accelerates to fulfil the aspirations of 1.38 billion people.

Ambani said that "taking advantage of over 300 sunny days in a year, India can easily generate over 1,000 GW of solar energy on just 0.5% of our land."

Mentioning PM Narendra Modi's goal to reach 450GW of renewable energy capacity by 2030, Ambani said that out of this, "Reliance will establish and enable at least 100GW of solar energy by 2030."

While efforts globally are to make Green Hydrogen the most affordable fuel option by bringing down its cost to initially under USD 2 per kg, Ambani said that he is sure India can set an even more aggressive target of achieving under USD 1 per kg within a decade.