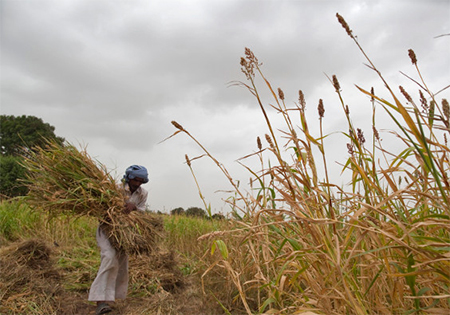 The Cabinet Committee on Economic Affairs (CCEA) chaired by the Hon'ble Prime Minister Shri Narendra Modi has approved the increase in the Minimum Support Prices (MSPs) for all mandated Kharif crops for marketing season 2020-21.

Government has increased the MSP of Kharif crops for marketing season 2020-21, to ensure remunerative prices to the growers for their produce. The highest increase in MSP is proposed for nigerseed (Rs 755 per quintal) followed by sesamum (Rs 370 per quintal), urad (Rs 300 per quintal) and cotton (long staple) (Rs 275 per quintal). The differential remuneration is aimed at encouraging crop diversification.

The increase in MSP for Kharif Crops for marketing season 2020-21 is in line with the Union Budget 2018-19 announcement of fixing the MSPs at a level of at least 1.5 times of the All-India weighted average Cost of Production (CoP), aiming at reasonably fair remuneration for the fanners. The expected returns to farmers over their cost of production are estimated to be highest in case of Bajra (83%) followed by urad (64%), tur (58%) and maize (53%). For rest of the crops, return to farmers over their cost of production is estimated to be at least 50%.

Government’s strategy is one of promoting sustainable agriculture with diversified cropping pattern matching with the country's agro-climatic conditions, towards higher productivity without jeopardizing nation's bio-diversity. Support is in the form of MSP as well as procurement. Besides, with the intention of giving enough policy thrust to income security of the farmers. Government's production-centric approach has been replaced by income-centric approach.

Concerted efforts were made over the last few years to realign the MSPs in favour of oilseeds, pulses and coarse cereals to encourage farmers shift to larger area under these crops and adopt best technologies and farm practices, to correct demand - supply imbalance. The added focus on nutri-rich nutri-cereals is to incentivize its production in the areas where rice-wheat cannot be grown without long term adverse implications for groundwater table.

In continuation with the above-mentioned measures, Government is taking holistic approach towards supporting the farmers and facilitate farming related activities in the lockdown situation due to Covid 19. Efforts are being made to facilitate marketing of agricultural produce by the farmers. Advisories have been issued by the Union Government to State Governments / UT to facilitate Direct Marketing, enabling direct purchase from the fanners / FPOs / Cooperatives etc. by Bulk Buyers /Big Retailers / Processors by limiting regulation under State APMC Act.

Besides, the Umbrella Scheme "Pradhan MantriAnnadataAaySanraksHanAbhiyan” (PM-AASHA) announced by the government in 2018 will aid in providing remunerative return to farmers for their produce. The Umbrella Scheme consists of three sub-schemes i.e. Price Support Scheme (PSS), Price Deficiency Payment Scheme (PDPS) and Private Procurement & Stockist Scheme (PPSS) on a pilot basis.

In addition, under the Pradhan MantriKisanSammanNidhi (PM-KISAN) Scheme during the lockdown period from 24.3.2020 till date, about 8.89 crore farmer families have been benefitted and an amount of Rs. 17,793 crore has been released so far.

In order to provide food security during the prevailing situation due to COVID-19 pandemic, the Government has decided to distribute pulses to the eligible households under Pradhan MantriGaribKalyanYojana (PM-GKY). About 1,07,077.85 MT pulses have so far been issue/d to the States/UTs.