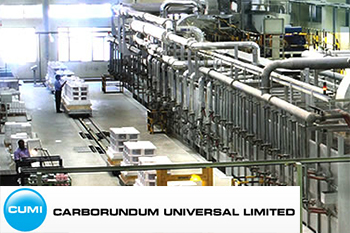 Carborundum Universal Limited’s consolidated sales for the quarter ended September 30, increased by 22% to Rs834cr from Rs683cr in the corresponding period of last year, driven by steady performance across business segments. At the standalone level, sales grew by 30% to Rs551cr in Q2FY22 from Rs424cr in Q2FY21.

The company said that on a consolidated basis, segmental profitability for the Quarter recorded strong growth across all three segments. Profit before tax was Rs137cr as against Rs123cr, and Profit after tax and non-controlling interest grew by 13% to Rs98cr against Rs86cr in Q2 of the previous year.

The capital expenditure incurred during the first half-year was Rs71cr. The debt-equity ratio was 0.018. Cash and cash equivalents including deposits with tenure exceeding 3 months net of borrowings were at Rs650cr.

On October 6, 2021, the company acquired 71.99% of the Equity stake in PLUSS Advanced Technologies Private Limited (PLUSS). PLUSS along with its wholly-owned subsidiary in Netherlands – M/s. Pluss Advanced Technologies BV has become subsidiaries of CUMI effective from this date. PLUSS is a specialty materials research and manufacturing company involved in the fields of Phase Change Materials (PCM) for thermal energy storage and specialty polymeric additives for enhancing mechanical and barrier properties.

Profit/ (Loss) before finance cost and tax was at Rs45cr as against Rs37cr in Q2 of last year on account of better capacity utilizations and price increase.

Electro Minerals
Segment revenue was at Rs323cr versus Rs275cr in Q2 of last year, resulting in an increase of 17%. The Standalone Electro Minerals segment grew in double digits.

Ceramics
Segment revenues were higher by 24% at Rs210cr as against Rs169cr in Q2 of last year. Standalone ceramics business performed well despite logistics challenges for exports consignments. Subsidiaries in Russia, America, and Australia also did well. Profit before finance cost and tax at Rs49cr remained flat due to increasing input costs and supply chain disruptions.