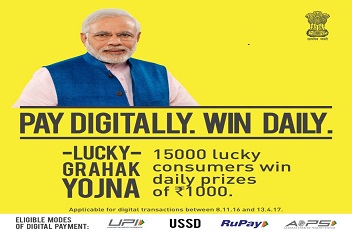 It has been 58 days since the launch of NITI Aayog’s two incentive schemes – Lucky Grahak Yojana and Digi Dhan Vyapar Yojana to promote digital payments and the public response has been quite encouraging.

The initiative to make Digital Payments a mass movement in India through the two schemes has made a headway across the country with more and more people adopting digital transactions.

According to the latest figures released by the National Payments Corporation of India (NPCI), which has been executing the schemes, nearly 10 lakh consumers and merchants have been disbursed over Rs.153.5 crore as reward money till 20th February, 2017.

The winners have their own stories to tell it all as to how the switch over to digital payments has been le and how it has made the life easier for them. Sabir, a 22-year-old cab driver from Delhi won Rs 1,00,000 under Lucky Grahak Yojana for consumers. Digital payments are a blessing in disguise for him because he has to take care of his mother and differently-abled sister after the demise of his father and doesn’t have time to stand in lines at the bank. Bhim Singh, a 29-year-old wheat farmer from Hissar in Haryana and winner under this initiative, now uses digital payments for buying supplies from wholesalers. Jayanthi SF, from Coimbatore in Tamil Nadu, a 29-year-old engineering student and mother to a six-year-old, is a proud winner of Rs 1,00,000 under the scheme.

Among the merchants, Damodar Prasad Khandelwal, a 42-year-old grocery store owner from Alwar in Rajasthan, won Rs. 50,000 in the weekly prize under Digi-DhanVyaparYojana for merchants. Manju R Gowda, a 32-year-old fast-food restaurant owner in Mumbai is another winner of Rs 50,000 under this scheme.

An analysis of the reward data also reveals winners as belonging to a wide geographical cross-section, including rural and urban areas spread across every State.

NITI Aayog has been organizing DigiDhanMelas at 110 cities across India, beginning December 25th, 2016. It will go on every day until April 14, 2017. Till date, 59 DigiDhanMelas have been organized to take the digital payments movement to the masses across the country.