As I prepared to write this speech, I found that whether it is a regular Budget for the full year or an interim Budget, some things remain the same. For example, our goals are the same and the global context is the same. As I said last year, we are not unaffected by what happens in the rest of the world. Since September 2008, the state of the world economy has been the most decisive factor impacting the fortunes of every developing country. Hence, it is pertinent to say a few words on the global economy as well as on the global risks. World economic growth was 3.9% in 2011, 3.1% in 2012 and 3.0% in 2013. Those numbers tell the story. Among India’s major trading partners, who are also the major sources of our foreign capital inflows, the United States has just recovered from a long recession; Japan’s economy is responding to the stimulus; the Eurozone, as a whole, is reporting a growth of 0.2%; and China’s growth has slowed from 9.3% in 2011 to 7.7% in 2013...Read More

DTC to be put on the website of the ministry for public discussion: FM

Indian economy to be third largest by 2043: FM

Cars and Scooters to be cheaper: FM

Fiscal Deficit to be pegged at 4.1%; Revenue Deficit at 3%

Highlights of the Interim Union Budget 2014-15 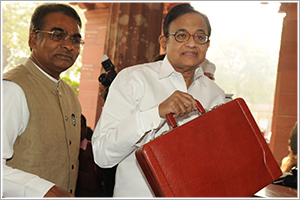 The Current Economic situation and the challenges

Vote on Account is balanced and on expected lines: FICCI

Overall the interim budget has been very satisfactory: Prateek Gupta

Interim Budget is positive for us: SAIL

Finance Minister P Chidambaram presented the interim budget for the fiscal year 2014-15 to cover expenditure until a new government is formed after elections due by May. According to Dr Wilfried Aulbur, Managing Partner, Roland Berger Strategy Consultants, "The reduction in excise duty will give the automotive industry a much needed relief after many quarters of demand side challenges."

"The action of government is welcome, but we reiterate the need to fix the basics of the Indian manufacturing model. We need good infrastructure (road, ports, etc), reliable and competitively priced electricity and flexible labour laws that allow linkage between salary increases and productivity gains. Consistent policies must help to address the root causes of weak consumer sentiment such as high interest rates, stubbornly high inflation and increasing fuel prices," Aulbur added.

Nihal Kothari, Executive Director, Khaitan & Co, "The Finance Minister has announced reduction in the excise duty. The excise duty on capital goods reduced from 12% to 10% on mobile handsets to 6% and in the case of automobile having different duty rate the reduction is by 2% to 4%. The customs duty has been reduced on the non-edible oils used in soap making to 7.5% and announced exemption of countervailing duty on machinery...Read More

The vote on account will be presented in Parliament by Finance Minister P Chidambaram, who has presented 8 budgets earlier. But what exactly is the vote on account? Since Parliament will not be able to vote on the entire Budget before the beginning of the new fiscal i.e. April—on account of general elections—the government would seek a vote-on-account. The discussion on the Budget begins a few days after its presentation. In a democratic set-up, Government is anxious to give Parliament full opportunity to discuss the budgetary provisions and the various proposals for taxation. Since Parliament is not able to vote the entire budget before the commencement of the new financial year, the necessity to keep enough finance at the disposal of Government in order to allow it to run the administration of the country remains. A special provision is, therefore, made for "Vote on Account" by which Government obtains the Vote of Parliament for a sum sufficient to incur expenditure on various items for a part of the year. Normally, the Vote on Account is taken for two months only. But during election year or when it is anticipated that the main Demands and Appropriation Bill will take longer time than two months, the Vote on Account may be for a period exceeding two months. In usual course, the Union Budget is presented on the last day of February. The vote-on-account usually does not make any changes in the prevailing tax rates and is restricted completely to the expenditure side of the government's budget. 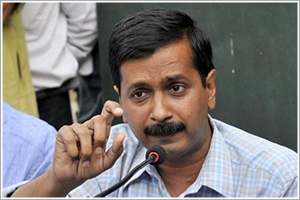 Former Delhi chief minister and Aam Aadmi Party leader Arvind Kejriwal has written a letter to Gujarat Chief Minister Narendra Modi asking him to clear his stand on the issue of gas pricing, according to reports. Report said that Kejriwal reiterated charge that Reliance Industries chief Mukesh Ambani was being paid much more for gas than the prices decided earlier. "You are a Prime Ministerial candidate, but why are you still quiet over the issue. A common man wants to know whether if your party forms government and you become the Prime Minister, would you bring down the gas price from 8 dollar per unit to 4 dollar?" said the letter, which Kejriwal was addressing a press conference. "This creates suspicion over your relations with Mukesh Amabani. What is your relation with Mukesh Ambani?" the letter added. There are reports that Kejriwal alleged that the UPA government is being run by Mukesh Ambani. Kejriwal has accused the BJP and the Congress of joining hands on opposing Jan Lokpal Bill in retaliation against the FIR, says report...Read More

Minister of State for Finance Namo Narain Meena said that Bimal Jalan panel which is scrutinising applications for new bank licences is expected to complete its work by March 2014. "The (Jalan) committee is expected to complete its work by the first quarter of the year 2014 and submit its report along with recommendations to RBI," Meena said in a written reply to the Rajya Sabha on Tuesday. Later on, RBI will take a decision to issue in-principle approval for setting up of banks by the eligible applicants, he added. Bimal Jalan, former RBI governor, is heading the panel on new bank licences. Initially, 26 entities evinced interest in entering the banking arena. Tata Sons, the holding company of the Tata group, withdrew its application in November, leaving 25 players in the fray. Among public sector units, India Post and IFCI have submitted applications.   Microfinance institutions such as Bandhan Financial Services and Janalakshmi Financial, too, have expressed their intention to set up banks. RBI had issued guidelines for licensing of new banks in the private sector on February 22 and came out with clarifications in the first week of June. 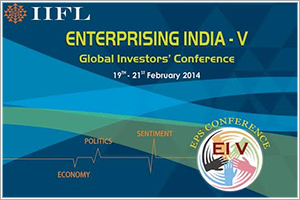 Speaking at the inaugural session, Nirmal Jain, Chairman, IIFL, said, "The Indian market is looking forward to the general election and the emerging political scenario. The market is expecting a positive outcome and a stable government. This will change the sentiment immediately as they expect a decisive leadership to change the course of economy. Our theme captures all variables that matter today: Economy, Politics and Sentiment or EPS of a different kind."

Earlier in the session, Dr. Jim Walker, Renowned Economist, Founder & Managing Director, Asianomics Macro Ltd in his presentation titled ‘The Storm after the Calm’, said, "Complacency has overwhelmed fundamentals in the QE-addicted investment world. In India, there is more weakness to come in economic growth data as the private sector deleverages and balance sheets are repaired."...Read More 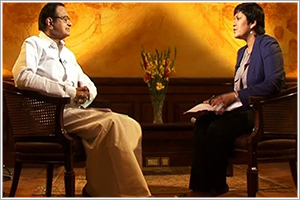 Headline 4.6% fiscal deficit may be impressive, but experts are not satisfied with the quality of fiscal adjustment? How satisfied are you yourself?

Our joints that act as the connecting points between bones and make all motion possible are priceless for the body. It is traumatic then when they start failing, leaving you with restricted movement and a curtailed life. Total knee replacement surgery comes to the rescue of many when a knee becomes decrepit. However, a knee replacement that was once considered a recourse of the old is now becoming more common among a younger set of patients. So, what exactly leads to a joint replacement surgery? Developmental disorders, injury caused by accidents and the condition of osteoarthritis with unstable pressure on joints could make you one of the millions needing joint replacements. One of the most common conditions that can lead to the need of a knee replacement is arthritis that degenerates the joint...Read More

Cardiovascular diseases take root when young, may strike at any age

Click below for the India Infoline Economy Round Up:
https://content.indiainfoline.com/wc/news/INL/Economy_210214.html