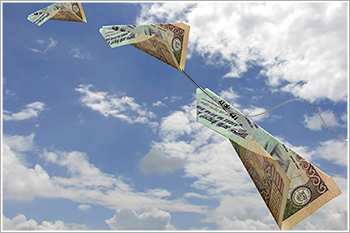 Financial lessons you can learn this Makar Sankranti

Come January 14th and the Indian skies will break into a riot of colours, as people celebrate Makar Sankranti. Kites of different shapes, sizes, colours and texture will vie in sky with each other to make a place for themselves and entangle in a pursuit to outdo the rest. As you are busy preparing for this festival of kites and friendly combat, have you really thought about its significance, and why kites are flown on Sankranti? Well, let’s take you on a fun journey on kites and Sankranti traditions and guess what? You can learn a thing or two about financial planning from it as well.

Makar Sankranti (Uttarayan or Pongal or Poush Sankranti as it is called in other parts of India) coincides with the day the Sun leaves the tropic of Cancer to move towards the tropic of Capricorn (called Makar in India). It is a day of great jubilation for farmers as it marks the end of the biting winters and the beginning of the new harvesting season. This day is therefore celebrated as a Thanksgiving for ending the harsh winters and a bountiful harvest.

Significance of flying kites on Sankranti
Sankranti has a philosophical significance in India as well. The word Sankranti literally means “movement”, and it is the day for the human race to realise and be thankful for movement. If there was to be no movement within and without our bodies, we would all be dead! But just like yin and yang in China, the concept of movement must be juxtaposed and appreciated against the stillness. Therefore, when we fly kites in the lap of the still skies, it is a reiteration of our thankfulness for this very moving!

Indian traditions are also rooted deeply in science and so is the tradition of kite flying on Sankranti. When we fly kites on Sankranti, we expose ourselves to the rays of the Sun. On this day when the Sun begins its journey towards the different hemisphere, it is expected to be benevolent and emanate rays that have medicinal benefits. During the winters our bodies are usually infected with cold and other infections which are eradicated by the direct exposure to the Sun’s rays on this particular day.

In Maharashtra, the “Til Gul” ( a sweet made of sesame seeds and jaggery) are prepared in homes to mark the harvest of the first sugarcane crop of the year (out of which jaggery is made).

In West Bengal this festival is referred to as “Poush Sankranti” is celebrated as a harvest festival where a variety of sweets such as Pithey, Puli, Patisapta are made with freshly harvested rice flour and jiggery made out of date palms.

In Uttar Pradesh it is believed that taking a holy dip in the Ganges on this day will provide “Moksha” or salvation from sins.

Makar Sankranti is referred to as Pongal in Tamil Nadu and other South Indian states, where it is celebrated as a three day festival which include a whole lot of festivities.

Some financial lessons you can learn this Makar Sankranti:

Get set for a flight:
Financial planning is not just about making a plan and keeping it static. You need to keep reviewing it and armed with proper resources and research of the markets you need to seize the opportunities that arise in the economic environment to enhance your portfolio. This is akin to kite flying where you need to customize a kite as per your abilities, have the perfect manja or string and set it to flight to soar above the rest when the wind is in your favour.

Keep your eyes on your kite:
When you are flying a kite, you cannot for a moment be careless and lose sight of how or in which direction your kite is flying. Similarly, in financial planning you have to be vigilant of the course that your investments are taking and review your investments to see that your financial goals both short term and long term are being met.

Be flexible
While flying kites people shout out “dheel de!” to their companions. It means when you are in the midst of a strong gust of wind you have to let go of the string and adapt to the situation. Similarly, when it comes to an investment climate, things are not always perfect. You have to patient and sometimes bear some temporary losses, but never lose sight of your vision of meeting your financial goals.

So now armed with this new found knowledge of Makar Sankranti, go ahead and fly those kites with new found fervor! Kai PO Che!

The author is Co-Founder & Director, CreditVidya