It's a common fear among individuals, who are feared of an unprecendented event to occur that will ruin their financial stability. 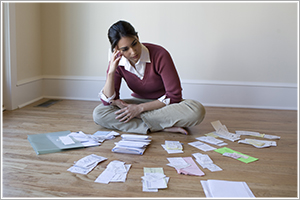 According to research reports, individuals live in some or the other form of fear and a majority of them battle money related insecurities almost every day.  So, let's discuss five common financial fears and solutions to tackle it.

1) Fear to meet catastrophic event: It's a common fear among individuals, who are feared of an unprecendented event to occur that will ruin their financial stability. Such fears generally draw from event that might have happened around like an earthquake could have led to loss of property or medical urgencies. Such fears could only be managed by reviewing things that could be controlled like an insurance policy to protect the loss of property or a sufficient medical cover could save you from worries.

2) Fear of Job Loss: The financial crisis of 2008-2009 that resulted in numorous job losses have filled the fear in employees that they could anytime be asked to part ways with their existing job and that could adversely impact financial future of an individual. Every person should prepare themselves against such possibilities by multiplying skills sets through attending workshops and classes. A person with ability to earn income then should be less concerned and more insightful about his/her next career move.

3) Fear of losing in Stock Market: Stock market is a place where there are more number of people who have lost money than those who didn't. Thus, a large percentage of individuals are skeptical about betting on the stock market for the fear of losing their capital. Under such circumstances, it is best to evaluate the risk profile of yourself and take an exposure capped to the limit of your risk tolerance. For example, you could have 60% of your portfolio in equity market, which is again diversified based on market cap and the rest in debt portfolio.

4) Fear of Debt Overburden: Wrong credit card habits and habit of acquiring things on easy installments could altogether load you up with unwanted debt and apparently leading to fear of non-repayment of debt. Therefore, it is necessary to straighten up your credit card habits by filtering out high-interest bearing cards and devising a systematic payment mechanism for paying your debt payments.

5) Fear of spending away retirement corpus: Lastly, individuals, who have been successful in creating a retirement corpus live in fear of eroding their corpus, when they find their children not settled financially. People have natural instinct to support their children by drawing from retirement corpus, but this behavior could only attract more financial insecurity in future. Therefore, it is best to help your children settle in their career at the earliest rather than providing for them for a stretched time.

Markets bullish with Nifty 50 above 17,100; IT index outperforms