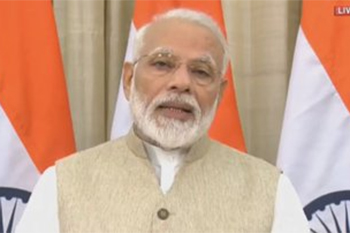 Speaking on the occasion, PM said the motive behind all these schemes launched today is to empower our villages and make India Self-Reliant (AatmaNirbhar Bharat) in the 21st Century.

The Prime Minister said the Matsya Sampada Yojana is also being launched with the same motive. He said it is being launched in 21 States of the country with an investment of Rs20,000cr which would be spent in the next 4-5 Years. Out of this, projects worth Rs1,700cr are being launched.

Under this scheme, he said that many facilities have been inaugurated in Patna, Purnia, Sitamarhi, Madhepura, Kishanganj and Samastipur.

The Prime Minister said the scheme provides for new infrastructure, modern equipment and access to new markets to the fish producers, along with increased opportunities for through farming as well as other means.

PM said this is the first time after independence, that such a major scheme has been launched in the country for the fisheries sector.

Modi said keeping in mind the importance of the sector and in order to exclusively deal with various issues concerning fisheries a separate Ministry has been created in the Government of India. This will facilitate our fishermen and colleagues related to fish farming and sale.

The goal is also to double fish exports in the coming 3-4 years. This will create millions of new employment opportunities only in the fisheries sector. After interacting with my friends in the sector today, my confidence increased further.

PM said that much of the fish farming depends on the availability of clear water and the Mission Clean Ganga will further help. He added the fisheries sector is also set to benefit from the work being done on river transport in the areas around Ganga river. The mission Dolphin announced on August 15 this year will also have its impact on the fisheries sector.

The PM lauded the work done by the Government of Bihar in provided safe drinking water r supply to every household. He said that in 4-5 years only 2% of houses in Bihar were linked to Water Supply connections and that now more than 70%households in Bihar are connected with the supply of clean drinking water. Prime Minister said the efforts of Bihar Government are now getting further support to Jal Jeevan Mission of Govt of India.

He said that even in this time of Corona, about 60 lakh houses in Bihar have been ensured to get water from the tap and this is a really big achievement. He cited this as an example of how the work in our villages continued during the crisis when almost everything in the country was stopped. He said that it is the strength of our villages that despite the corona, grains, fruits, vegetables and milk continued to come to the mandis, to the dairies without any shortage.

Not only this, the dairy industry has also made record purchases despite this difficult situation. He informed that the PM Kisan Samman Nidhi has also directly transferred money to the bank accounts of more than 10 crore farmers of the country, especially about 75 lakh farmers in Bihar.

He said this work is also praiseworthy because Bihar has also faced floods bravely along with the corona. He said that both the state government and the central government has taken efforts to complete the relief work at a fast pace.

PM said that many of the workers who have returned from the cities due to the Corona crisis are moving towards animal husbandry and they are getting support from many schemes of the Central Government and the Government of Bihar. He said that the Government is constantly making efforts to expand the country's dairy sector like making new products, new innovations, so that the farmers and cattle breeders get more income. Along with this, the focus is to improve the quality of livestock in the country, to maintain their cleanliness and health and access to nutritious food. With this goal, the PM said that a free vaccination campaign is launched today to vaccinate more than 50 crore livestock from the foot and mouth disease and brucellosis. Provisions have also been made under different schemes for better fodder to animals.

He added that Mission Gokul is underway to develop better indigenous breeds in the country. A countrywide artificial insemination program was started a year ago, Phase I has completed today.

The Prime Minister said Bihar is now becoming a major center for the development of quality indigenous breeds. Bihar is going to be strengthened in the dairy sector due to the modern facilities built in Purnia, Patna and Barauni under the National Gokul Mission today. The center built in Purnia is one of the largest centers in India. This will greatly benefit not only Bihar but a large part of eastern India. He added that this center will also give a further boost to the development and conservation of indigenous breeds of Bihar like 'Bachhaur' and 'Red Purnia'.

The Prime Minister said that usually, a cow gives birth to one child in a year. But with the help of IVF technology, many calves are possible in a year. Our goal is to reach every village with this technology. He said that along with the good breed of animals, the correct scientific information about their care is also equally important. The e-Gopala app launched today will be an online digital medium that will help the farmers to choose better quality livestock and get freedom from middlemen. This app will give all the information related to cattle care, from productivity, to its health and diet. He added when this work is completed, inserting the animal Aadhaar number in the e-GOPALA app will give all the information related to that animal easily. This will make it easier for cattle owners to buy and sell animals.

The Prime Minister said it is necessary to adopt scientific methods and build modern infrastructure in the village to develop sectors like agriculture, animal husbandry and fisheries rapidly. Bihar has been an important center for education and research related to agriculture.

He said that very few people know that Pusa Institute in Delhi refers to Pusa town near Samastipur in Bihar. During the time of colonial rule itself, a national level Agricultural Research Center was set up at Pusa in Samastipur. He praised visionary leaders like Dr. Rajendra Prasad and Jananayak Karpoori Thakur for carrying this tradition forward after independence.

Taking inspiration from these efforts, the Prime Minister said that in 2016 Dr. Rajendra Prasad University of Agriculture was recognized as a Central University. After this, Courses were expanded extensively in the university and in the colleges affiliated to it. He said taking this further, a new building of the School of Agri-Business and Rural Management has been inaugurated. Also, new hostels, stadiums and guest houses have been laid.

Considering the modern needs of the agricultural sector, 3 Central Agricultural Universities are set up in the country compared to only one 5-6 years ago. In the Bihar, Mahatma Gandhi Research Center was inaugurated to save farming from the floods that come in Bihar every year. Similarly, the Regional Research and Training Center for Fish in Motipur, the Animal Husbandry and Dairy Development Center at Motihari and many such institutes were started to connect agriculture with science and technology.

The Prime Minister said that clusters of food processing industries and research centres should be set up near villages and with that we can achieve the motto of Jai Kisan, Jai Vigyan and Jai Anusandhan.

The Prime Minister said that the Central Government has set up a Rs 1 Lakh Crore Agriculture Infrastructure Development Fund for creating special infrastructure and providing support to FPOs, Cooperative Groups to develop storage, cold storage and other facilities.

Even Women’s SHGs are getting good support and the support has increased 32 times in the last 6 years.

Narendra Modi said that efforts are being made to rope in all villages in the country as engines of growth and helping them make India Self-Reliant.