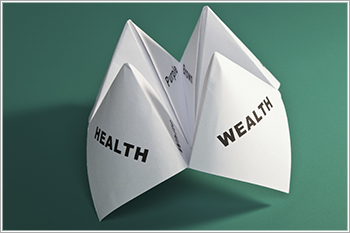 A healthy being will save more money than one who is not. Here are the ways in which a good health means more money.

One might have seen advertisements that connect well-being of health to performance in office. While sometimes these advertisements appear to over exaggerate but one cannot ignore the relation between health and wealth. A healthy being will save more money than one who is not. Here are the ways in which a good health means more money.

Healthcare Costs: We are all aware about the increasing cost of healthcare. Thus, if we proactively indulge in taking care of our bodies, we would save ourselves from the huge burden of medical costs in the form of physician's fees or pharmacy costs. These days there are seldom any doctors who prescribe medicines without seeing the diagnostic reports, which are difficult for people to sustain. Thus the age-old adage, ‘prevention is better than cure’ is relevant in today's world as well.

Absence from Work: Most of the companies allows sick leaves to their employees; however, the policies differ from company to company. Moreover, frequent sickness eats into the casual leave quota of employees. Furthermore, chronic sickness and absence of work is neither acceptable by the employer nor by other colleagues. Hence, frequent absence from work could poses threat not only to an employee’s performance but also his future career opportunities. Employers in such cases are bound not to promote or allow increment in salary on medical health grounds.

Side Venture: More often than not, people plan to start their own ventures in the long-term. Poor health can pose a threat to such aspirations as balancing between jobs and own ventures not only require extra hours but also undying energy. And, bad health could prevent one from taking up such ambitious projects.

Overall Performance: A hale and hearty person could easily adjust and balance his personal and professional life. Stamina and energy will keep an individual active at both work and home while the mind too will work efficiently. Such ability will not only increase chances of promotion, salary hike and other monetary benefits at the office but also would provide satisfactory results on personal fronts.

Investors' wealthdropped by Rs76,196 crore on Wednesday due to market decline

Centricity, a startup in wealth technology, has raised $4 million