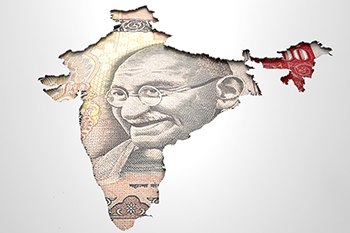 Heading into 2016 there were high expectations that the Indian rupee (INR) would be one of the better performing currencies in Asia. So far, it has failed to deliver. Hopefully, the latest budget from India's government reinvigorates the appeal for the currency, even if indirectly.

The recent underperformance of the INR has been partly due to the market's concern with three main risks, including:
However, we believe it would be wrong to turn overly pessimistic on the currency. In our view, we believe there is little reason to be overly worried about the RBI's FX policy or India's current account position.

Over the last few months, the RBI's intervention data show that the central bank has actually been leaning against portfolio outflows. Additionally, while the improvement in the current account and the FDI flows may have peaked, we believe the bulk of the progress should remain broadly supportive for the INR.

On the other hand, we need to monitor FX hedging and debt repayments related to External Commercial Borrowing (ECB) activities; however, in our opinion, the RBI's push to reduce corporates' currency mismatch is positive for the INR in the longer term.

It shouldn't be forgotten either that many of the positive attributes of the INR that first enticed investors, such as high carry, positive fundamentals, and a domestic-led growth story, largely remain intact. The INR is worthy of being an outperformer in the region and tactically we like it versus the PHP and the SGD. Looking ahead, USD-INR stability is broadly expected this year, but the EUR and the CNY's directions will be important drivers.

The author is Head of EM FX Research, HSBC