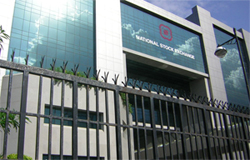 European shares fell in early trading with travel and leisure stocks leading the market lower after explosions hit the airport in Brussels. The FTSE 100 marginally down 0.5%. On the other hand, DAX gained 1.2% and the CAC 40 trading lower by 0.5% each.

A total of 12 stocks registered a fresh 52-week high in trades today, while 18 stocks touched a new 52-week low on the NSE.

The Indian rupee opened marginally down by 6 paise at 66.58/$ on Tuesday as against the previous close of 66.53/$. On Monday, rupee closed marginally lower against the US Dollar. US dollar seems to be stabilising against the basket of major currencies, which in a way is also restricting the upside in the emerging market currencies. On the domestic front, India’s current account deficit narrowed to 1.3% of the gross domestic product (GDP) in the fiscal third quarter, from 1.5% in the year earlier.

Himachal Futuristic Communications Ltd galloped 13% to Rs.16.20 on BSE. The company is entering into defence equipment manufacturing as part  of  its strategy to contribute to the nation's plan for self sufficiency in the defence sector by participating in the defence equipment manufacturing under the Government of India's "Make in India" initiative. HFCL will be exhibiting its wide range of defence related equipment during the eleventh edition of DEFEXPO 2016 starting March 28, 2016.

Indoco Remedies Ltd stock was higher by 11% at Rs. 298. The company has received the Establishment Inspection Report (approval) from US Food and Drug Administration (USFDA) for its solid dosages manufacturing facility at Goa (Plant I), thereby confirming the closure of inspection in October, 2015.

Reliance Defence and Engineering Ltd stock was higher by 3% at Rs. 68. The Defence Acquisition Council reportedly said that it approved the Defence Procurement Policy (DPP) 2016, which will come into effect from April 1, 2016.

JSPL gained 1.9% to Rs.61.15 on BSE. Sajjan Jindal-led JSW Energy Ltd is in advanced talks to acquire a power plant owned by Jindal Steel & Power Ltd, controlled by his younger brother Naveen, reports a business daily. The deal is valued at more than Rs. 5,000 crore and is to be announced before the 31st March, says the financial newspaper.

Just Dial Ltd stock was higher by 5% at Rs. 676. The company has made a post buyback public announcement dated March 18, 2016 for the attention of its shareholders in accordance with the provisions of the Securities and Exchange Board of lndia (Buy Back of Securities) Regulations, 1998, as amended.

Bharti Airtel slipped 1% to Rs.349.95 on BSE. After market hours the company has announced that it has entered into a definitive agreement with American Tower Corporation through its subsidiary company, Airtel Tanzania, for the sale of approximately 1,350 of its communications towers in Tanzania. Under the agreement, American Tower may acquire up to approximately 100 additional sites currently in development for an additional consideration. Airtel will be the anchor tenant on the portfolio under a lease with a ten-year initial term.

Defence stocks rallied on BSE and NSE after the new Defence Procurement Procedure (DPP), focusing on India-made products and fast-tracked acquisition process, was cleared by the top committee of the Defence Ministry on Monday.  The DPP will be unveiled at the Defence Expo on March 28. The policy will give first priority to Indian Designed Developed and Manufactured (IDDM) acquisition and relax norms with respect to blacklisting, says report. Reliance Defence and Engineering climbed 4.6% to Rs.69.10.  BEML jumped 2.8% to Rs. 1,097 on BSE. Bharat Electronics gained 0.5% to Rs.1,184. L&T gained 1.2% to Rs.1,243.

Mangalam Cement soared 6.4% to Rs.239.80 on BSE after block deal. Around 3.82 million equity shares of the company have changed hands in block deals.

Puravankara Projects jumped 4% to Rs.49.35 after the company announced its foray back into the Western Region with a proposed development of 30 acres in Mundhwa, Pune. Purva Silversands, the first phase of development across 20 acres is being launched as a unique Integrated Lifestyle District with a design theme that the city of Pune has hitherto not seen before.