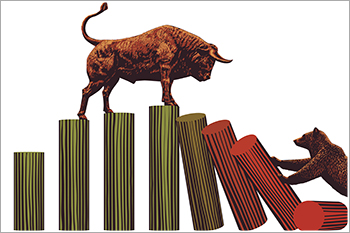 Nifty Banking and Financial Services reversed yesterday’s trend to trade higher despite weak markets on Tuesday. PSU Bank stocks that traded higher on Monday were under pressure on Tuesday.

Cholamandalam Investment and Finance Company and Mahindra & Mahindra Finance were also bullish while Bajaj Finance was trading marginally in the green ahead of the quarterly earnings announcement. ICICI Pru life was bearish ahead of earnings while SBI Life dragged the most in the Financial Services sector.

The benchmark indices opened higher on Tuesday but soon slipped into the red, led by selling in shares of Maruti Suzuki, Reliance Industries and UltraTech Cement, among others. Surge in oil prices and FIIs again turning sellers are acting as headwinds for the market.

Axis Bank led the gains by surging nearly 2%. HDFC Bank was 1.2% higher. HDFC Bank reported 8.85% yoy growth in total consolidated revenues in the Dec-21 quarter at Rs43,365cr. Revenues of HDFC Bank were up 4.65% on a sequential basis. In terms of top line revenues, Kotak Bank was nearly 1% higher.

Cholamandalam Investment and Finance Company gained over 3%. The company is proposing to make a strategic investment in the equity shares of Payswiff Technologies Private Limited (Payswiff) up to a sum not exceeding Rs.450 crores in one or more tranches. In this regard, the Company has signed a Shareholders Agreement and a Share Purchase Agreement on 17th January, 2022 with Payswiff, its founders and other existing shareholders. The total investment will result in the Company holding up to 72.12% of the equity capital of Payswiff on a fully diluted basis and Payswiff consequently will become a subsidiary of the Company.