Over the next few months, efforts are likely to be channeled towards bringing the central bank and the government on the same page on inflation control

Along expectations, Arun Jaitley was named as the new Finance Minister and was also handed the Defence portfolio. Apart from the cabinet allocations, focus was on the discussions between the RBI Governor and the new Finance Minister, ahead of the central bank’s early-June review. Soon after the meeting, the RBI reiterated that inflation control was a priority and the bank will also attempt to balance growth-inflation objectives. We look for the Repo to be left unchanged next week. 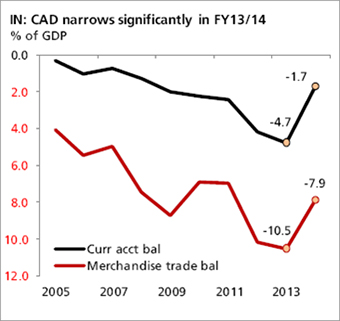 Over the next few months, efforts are likely to be channeled towards bringing the central bank and the government on the same page on inflation control. For a start, cooperation will be sought through fiscal consolidation. If the latter is on track, rationalization in subsidies will contain demand-led forces (beyond the immediate feed-through due to higher prices) and help draw-in the private sector due to lower government borrowings.

Separately, RBI data saw the FY13/14 current account deficit (CAD) narrowed sharply to -1.7% of GDP, more than halving from previous year’s -4.7%. The Jan-Mar14 deficit at USD 1.3bn (-0.2% of GDP) was the smallest in over four and half years and dwindled from USD 10.3bn average in the prior three quarters. Bulk of this improvement was on account of a 25% YoY fall in the merchandise trade deficit in 13/14, accompanied by a 7% jump in invisibles’ receipts.

Persistent outflows under the primary income sub-component, however, were worrisome. These outflows jumped to USD 23.5bn in 13/14 from average -USD 7bn in 2009-10. This trend implies that the current account gap is being plugged by debt-creating flows (offshore borrowings, non-resident deposits etc.), rather than investment-oriented sources like FDI. Further, the balance of payments po­sition was comfortable at US$15.5bn in FY13/14 (vs 12/13’s US$3.8bn).

Notably, the improvement in the current account gap is not by virtue of struc­tural changes, but engineered by trade restrictions on gold imports and slump in non-oil, non-gold imports due to a lackluster weak domestic environment. This implies that this scale of improvement will be difficult to replicate in FY14/15.

Firstly, curbs on gold purchases are being scaled back gradually and might be ful­ly lifted by the incoming government to remove trade distortions. Any rebound in purchases here will widen the current account gap. Secondly, the incoming government is expected to spur a rebound in investment spending and capex expansion plans. This might buoy demand for imported inputs until the domes­tic manufacturing cycle picks pace. Hence, any rationalization in fuel imports will be more than offset by higher capital goods, metals and machinery imports.

We see scope for the CAD to re-widen to 2.5-2.8% from -1.7% in FY13/14. The final deficit might fall at the lower end of the indica­tive range if external demand holds up and buoys exports, along with a shallow recov­ery in the gold demand even after all the curbs are removed.

As far as the current account gap is kept close to the RBI’s comfort level, funding needs will be well-cushioned by flows attracted to the revival in growth on a rebound in domestic drivers. A tail risk here is the direction of the US rates, with an earlier-than expected push to hike rates likely to revive uncertainties for the emerging markets space, including India.