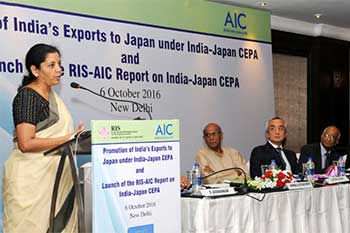 Commerce and Industry Minister, Nirmala Sitharaman has said that steps have been taken to sort out the implementation issues related to CEPA and improve bilateral trade as well as trade balance with Japan.

Speaking at the seminar on promoting India’s exports to Japan under India-Japan CEPA and release of RIS report on India-Japan CEPA in New Delhi today she said Japan is one of the closest and most reliable trade partners of India and we recognise that Japan will play an increasingly important role in India’s economic transformation and development.

Sitharaman said Prime Minister of India visited Japan in 2014 and it was occasioned by the elevation of our bilateral partnership to the status of special strategic and global partnership. She said India - Japan partnership has expanded over the past few years and now the identified complementarities are being harnessed through trade and investments to our mutual advantage.

The Minister said the Comprehensive Economic Partnership Agreement i.e. CEPA between India and Japan came into force on 1st August, 2011 and is one of the most comprehensive agreements concluded by India. She said Bilateral trade between India and Japan pre-CEPA in 2010 was US$10.4bn and currently in 2016 stands at US&14.5bn. However, trade deficit of India with respect to Japan has also increased from US$3.1bn pre CEPA to US5.2bn post CEPA

The Minister said our concern is this increasing trade deficit between the two countries. We must look at ways and means to address this skewed trade. We feel that one of the best ways to address this concern is to increase our exports to Japan. Smt. Sitharaman said the Japanese pharmaceutical market offers a huge untapped potential for Indian pharma industry. India’s strength in Pharma sector is well established. She said this coupled with the decision of Government of Japan towards attaining an 80 % share of generic medicines by 2018, should naturally provide an opportunity for the internationally acclaimed generic drug industry of India. However, the share of India in the Japanese drug market continues to be below par and limited mostly to API’s. She said the demand of generic medicine in Japanese market and capability of India to meet this demand can prove a win-win situation for both countries.

The Minister said to realise our true potential in trade, we also need to address the implementation issues of CEPA .Citing an example she said:

a.       Japan accorded a preferential tariff of 1.9 % as against an MFN rate of 3.5 % to Fish Surimi from India. However, as per the requirement to preserve the protein content during storage, a negligible amount of an imported Cryo-protectant called TSPP is applied to the fish.

b.      Though the value of  the TSPP is less than half a per cent of the overall cost of the product, the interpretation under rules of origin preclude it from availing the CEPA benefits on the grounds that the ‘Product is not of Indian origin’.

c.       In this report, RIS has made a detailed analysis of such issues through extensive research including consultations with various stakeholders and authorities both in India as well as in Japan.

The Minister said with the strengthening bilateral cooperation and cementing of the friendship between the two countries, our trade and investments hold a promising future.