On the eve of International Women’s Day, new research from the Grant Thornton International Business Report (IBR) shows that despite an upsurge of debates and measures to promote gender equity in the workplace, the representation of Indian women in senior positions remains a cause of concern. The survey finds a growing support for regulation to get women onto boards and facilitate their careers paths.

Pallavi J. Bakhru, Director, Grant Thornton Advisory Private Limited, said, “Recognising the need for encouraging a more expansive mind-set about the role of women in corporates, the Indian Government, through the new Companies Act, adopted a legislative approach to enforce change. The provisions of the new Act, dictating certain sets of companies to mandatorily appoint a women director to their boards, represent a promising progress for talented Indian women to break the glass ceiling.”

The IBR reveals that support for the introduction of quotas to get more women on boards is growing. In India, 64% of the business leaders would now like to see quotas for the number of women on the boards of large listed companies, up from 44% in 2013.

In addition to the legislative approach to promote and raise the number of females leading and overseeing management in public companies, businesses are also implementing measures which could make a real difference. Our research shows that majority of Indian companies are offering paid maternity leave (65%) and flexible working hours (59%) for creating a path for women to fill more senior roles and gain a firm footing in the workplace.

Commenting on the results of the survey, Nidhi Maheshwari, Senior Director - Markets, Grant Thornton Advisory Private Limited, stated, “Considering that at times, family takes precedence over career for most Indian women, the investment in enabling initiatives from the organisations need to be revisited. Addressing this deterrent for Indian working women to scale the corporate ladder requires corporates to take up more gender diversity program capable of delivering concrete results.”

Improve mentoring: a little more than one in four Indian companies (28%) runs a specific programme to promote women?s leadership, as compared to one in four companies globally (24%). 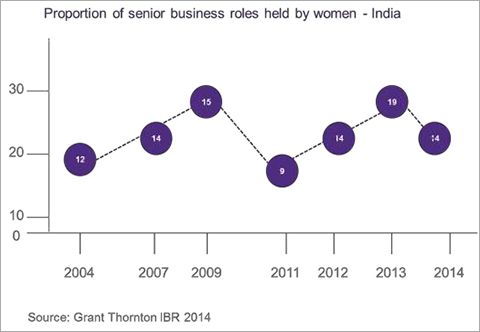 Hire more female graduates: in an average year, just 14% of the graduates mid- market Indian businesses hire are women. The corresponding global figure of 21% calls for a need for India Inc to unpack the current male bias around hiring and promotion that is the key to increasing diversity.