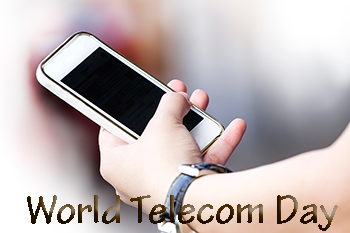 The 2016 World Telecommunication and Information Society Day (WTISD-2016) will focus on the theme: "ICT entrepreneurship for social impact", as endorsed by the International Telecommunication Union Council. While the world focuses on ICT (Information and Communication Technology) enterprises and startups, India telecom industry is heading towards consolidation with four-five huge operators emerging from the shake-out.

May 17, which marks the foundation of International Telegraph Union (ITU), is celebrated as the World Telecommunication Day across the globe. The World Telecom Day aims to increase awareness about communication. Its focus lies in harmonizing national policies, bridge technological differences, foster inter-connectivity, and inter-operability of systems on a global scale.

The 2016 World Telecommunication and Information Society Day (WTISD-2016) will focus on the theme: "ICT entrepreneurship for social impact", as endorsed by the International Telecommunication Union Council. While the world focuses on ICT (Information and Communication Technology) enterprises and startups, the Indian telecom industry is heading towards consolidation with four-five huge operators emerging from the shake-out.

Fitch says, the top four, Bharti, Vodafone India, Idea Cellular and Reliance Communications are likely to raise their revenue market share to 80% from 77% last year. Unprofitable telcos, such as Videocon, Aircel and Tata, could exit, given their unviable business model, now that they are able to sell their under-utilised spectrum. Telenor is said to be on the verge of exiting its India business by either merging or selling its telecom operations.

In a recent interview to IIFL, Idea Cellular MD Himanshu Kapania said, “India is entering into a new phase of over-supply of spectrum from a spectrum starved society that the country has been for the past 20 years. Market is entering into consolidation with the number players declining. With the availability of 700 MHz, harmonisation of 1800 MHz, additional slots being available on 2100 MHz and 2300 MHz and availability of 2500 MHz, we are experiencing over-supply of spectrum.”

Over-supply of spectrum could have an impact on the upcoming auctions scheduled in around July 2016. The 700MHz band is the most premium spectrum that government plans to put for auction in July. The Telecom Regulatory Authority of India has recommended Rs. 11,485 crore per megahertz of radiowaves in this band which is the highest ever for any spectrum. However, concerns are being raised about the high base price of 700MHz which may fail or seriously limit the investment capability in telecom networks.

Fitch maintained a negative outlook on the Indian telco industry for 2016 expecting the credit profiles of the top-four telcos to come under pressure from tougher competition, larger capex requirements and debt-funded M&A. The telecom industry grew 4.6% in FY16 as compared to otherwise growth of 7-12% throughout the year, reasons being national roaming rates slashed up to 75%, increase in service tax, addition of Swachh Bharat cess and data service no longer remain a default services from November 2015. There are, however, certain bright spots like spectrum harmonisation, spectrum trading and sharing laws, infrastructure sharing laws, proposals for reducing SUC from 5% to 4.5% and to 3% in couple of years, mega spectrum auction in July 2016 where all the available spectrum will be considered and most important - a relief from TRAI’s call drop compensation by the apex court.

A quick look at the statistics shows that India is on the verge of becoming the top telecom market in the world. It is currently the second-largest telecommunication market and has the third highest number of internet users in the world. According to ibef.org, between FY 07-16 India’s telephone subscriber base expanded at a Compound Annual Growth Rate (CAGR) of 19.5 per cent to 1,022.61 million and teledensity to 80.98.

The total mobile services market revenue in India is expected to touch US$ 37 billion in 2017, registering a Compound Annual Growth Rate (CAGR) of 5.2 per cent between 2014 and 2017, according to research firm IDC.

All in all, India telecom operators have substantial reasons to celebrate the World Telecommunication Day and map a progressive road ahead. As per a Microsoft report, India will emerge as a leading player in the virtual world by having 700 million internet users of the 4.7 billion global users by 2025. With the government’s regulation policies and 4G services on a roll, the Indian telecommunication sector is expected to witness further growth in the next few years.