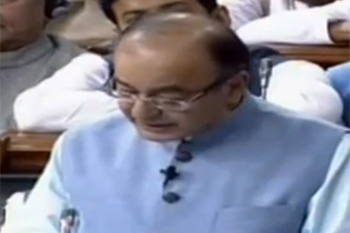 I rise to present the Budget for the year 2016-17.
I am presenting this Budget when the global economy is in serious crisis. Global growth has slowed down from 3.4% in 2014 to 3.1% in 2015. Financial markets have been battered and global trade has contracted. Amidst all these global headwinds, the Indian economy has held its ground firmly. Thanks to our inherent strengths and the policies of this Government, a lot of confidence and hope continues to be built around India.
The International Monetary Fund has hailed India as a bright spot amidst a slowing global economy. The World Economic Forum has said that Indias growth is extraordinarily high. We accomplished this despite very unfavourable conditions and despite the fact that we inherited an economy of low growth, high inflation and zero investor confidence in Governments capability to govern. We converted these difficulties and challenges into opportunities.
Let us look at our achievements compared to the last three years of the previous Government when growth had decelerated to 6.3%. The growth of GDP has now accelerated to 7.6%. This was possible notwithstanding the contraction of global exports by 4.4% compared to 7.7% growth in world exports during the last three years of the previous Government. CPI inflation was at 9.4% during the last three years of the previous Government. Under our Government, CPI inflation has come down to 5.4%, providing big relief to the public. This was accomplished despite two consecutive years of monsoon shortfall of 13%, compared to normal rainfall in the last three years of the previous Government.

Our external situation is robust. The Current Account deficit has declined from 18.4 billion US dollars in the first half of last year to 14.4 billion this year. It is projected to be 1.4% of GDP at the end of this year. Our foreign exchange reserves are at the highest ever level of about 350 billion US dollars.

Our initiatives in the last 21 months have not only placed the economy on a faster growth trajectory but have bridged the trust deficit, created by the previous Government. We had to work in an unsupportive global environment, adverse weather conditions and an obstructive political atmosphere.

We believe in the principle that money with the Government belongs to the people and we have the sacred responsibility to spend it prudently and wisely for the welfare of our people, especially the poor and the downtrodden. We have increased our Plan expenditure at the RE stage in 2015-16 in contrast to the usual practice of reducing it. We achieved this despite adopting the Fourteenth Finance Commission recommendations which increased devolution to the States by 55%.

We must now look ahead. The risks of further global slowdown and turbulence are mounting. This complicates the task of economic management for India. It has three serious implications for us. First, we must strengthen our firewalls against these risks by ensuring macro- economic stability and prudent fiscal management. Second, since foreign markets are weak, we must rely on domestic demand and Indian markets to ensure that Indias growth does not slow down. And third, we must continue with the pace of economic reforms and policy initiatives to change the lives of our people for the better.

We see these challenges as opportunities. The financial years 2015-16 and 2016-17 have been and will be extremely challenging for Government expenditure. The 14th Finance Commission has reduced the Central share of taxes to 58% from the 68%. In the financial year 2015-16, we managed to improve upon the budgeted expenditure due to revenue buoyancy, notwithstanding the steep reduction in the Central share of taxes. The next financial year 2016-17 will cast an additional burden on account of the recommendations of the 7th Central Pay Commission and the implementation  of  Defence  OROP.    The  Government,  therefore,  has  to prioritise its expenditure. We wish to enhance expenditure in the farm and rural  sector,  the  social  sector,  the  infrastructure  sector  and  provide  for recapitalisation of the banks. This will address those sectors which need immediate attention. Once the Government discharges these priority obligations, it shall then focus on other areas which are also of utmost priority to the Government.

While increasing the outlay of various social sector programmes, the Government will undertake three major schemes to help the weaker sections of the society. The Pradhan Mantri Fasal Bima Yojana has already been announced to protect the farmer from the adverse consequences of nature. The farmer will pay a nominal amount of insurance premium and get the highest ever compensation in the event of any loss suffered. A health insurance scheme which protects one-third of Indias population against hospitalisation expenditure is also being announced. The Government is also launching a new initiative to ensure that the BPL families are provided with a cooking gas connection, supported by a Government subsidy. This will significantly improve the health of women and those BPL families who suffer adversely from the ill-effects of Chulha cooking.

The Annual Budget is also an opportunity for the Government to outline its priorities for the year to come. The priority of our Government is clearly to provide additional resources for vulnerable sections, rural areas and social and physical infrastructure creation. The Government shall also endeavour to continue with the ongoing reform programme and ensure the passage of the Constitutional amendments to enable the implementation of the Goods and Service Tax, the passage of Insolvency and Bankruptcy law and other important reform measures which are pending before the Parliament.

Additionally, as I will elaborate later, we will undertake significant reforms, such as the enactment of a law to ensure that all Government benefits are conferred upon persons who deserve it, by giving a statutory backing to the AADHAR platform; bringing significant changes in the legislative framework relating to the transport sector so as to free it from constraints and restrictions; incentivising gas discovery and exploration by providing calibrated marketing freedom; enactment of a comprehensive law to deal with resolution of financial firms; providing legal framework for dispute resolution in PPP projects and public utility contracts; undertaking important banking sector reforms and public listing of general insurance companies; and undertaking significant changes in FDI policy.
Our agenda for the next year is, therefore, to Transform India in this direction. My Budget proposals are, therefore, built on this transformative agenda with nine distinct pillars.
These include: