Read Full Story
“We are grateful to our farmers for being the backbone of the country’s food security. We need to think beyond food security and give back to our farmers a sense of income security. Government will, therefore, reorient its interventions in the farm and non-farm sectors to double the income of the farmers by 2022.”  Finance Minister Arun Jaitley, budget speech, February 29, 2016. 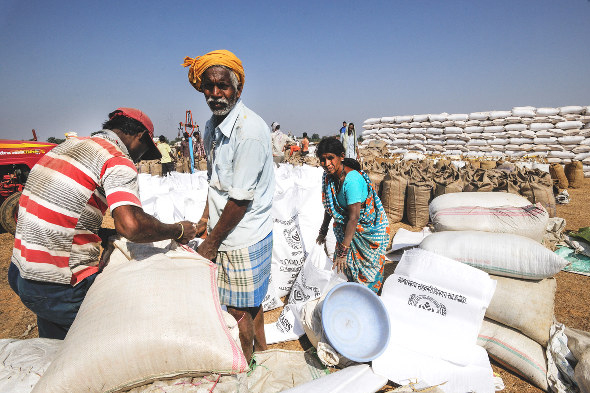 After adjusting for rising costs, an Indian farmer’s income effectively rose 5% per year over a decade (2003-2013), according to an IndiaSpend analysis of various government data, calling into question Jaitley’s declaration of doubling income over the next five years.

Doubling of real incomes would be “a miracle of miracles”, as it would imply a compound growth rate of 12% per annum, Ashok Gulati, former chairman of Commission for Agricultural Costs and Prices and Professor, Indian Council for Research on International Economic Relations, wrote in Indian Express.

The average monthly income from raising crops and rearing animals increased from Rs 1,060 in 2003 to Rs 3,844 in 2013, according to the report Situational Assessment of Agricultural Households by the National Sample Survey Organisation, a compounded annual income growth rate of 13.7%.

To double the income of farmers by 2022, in nominal (numerical) terms—which do not take inflation into account—would require a 15% annual income growth rate (compounded), according to our estimates.

So, the government would seemingly have to ensure a marginal increase in the rate of income growth—keeping business as usual—from 13.7 % to 15% per year to deliver on the promise of doubling farmer income.

However, there are four hurdles:  Unless these issues are addressed, a farmer’s income will only double nominally. Real income in 2022, adjusted for inflation and increased expenditure, will still be close to 2016 income, according to this report by Devinder Sharma, an eminent food and trade policy analyst.

Profit margins of farmers are declining because of dropping farm productivity and a rise in input costs. 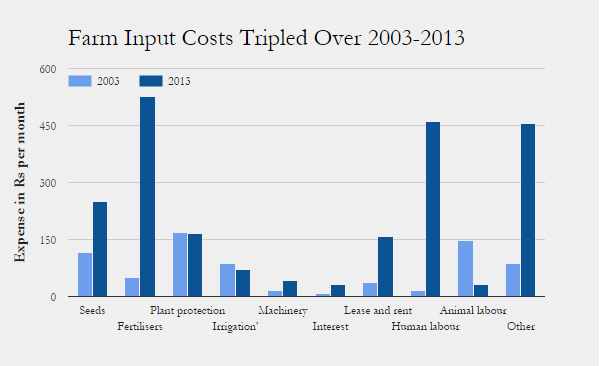 While income from cultivation in 2013 became 3.6 times that in 2003, input costs tripled in the same period, almost nullifying the effect of tripling income.

Does it help any longer that government buys harvests?

Started in 1965, the Minimum Support Price (MSP) is a system of artificial pricing that attempts to ensure just remuneration to farmers. The Commission for Agricultural Costs and Prices (CACP) fixes the MSP of procurement for 23 agricultural items produced in India.

While the announcement of increases in MSP should act as an encouragement to farmers when they sow, three factors do not let this happen:

There is very low awareness about MSP — less than 25% of farmers on an average, while for some crops, less than 5% — know about MSP. 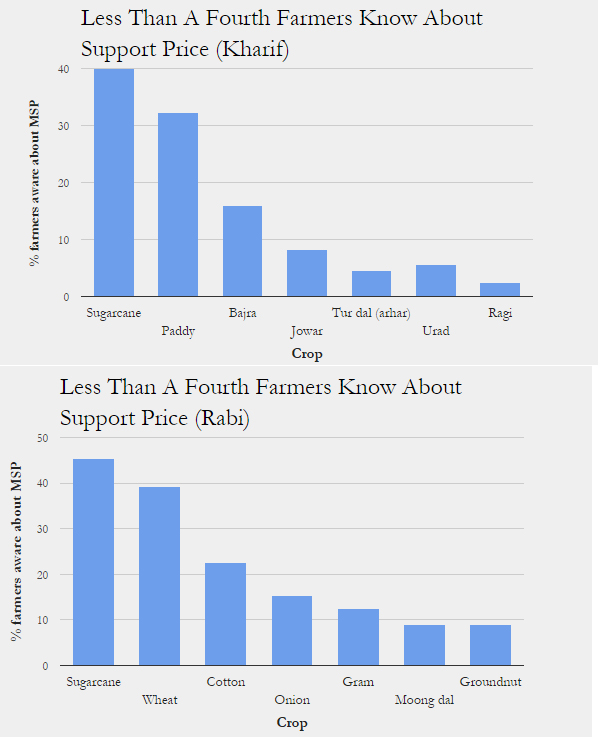 Farmers get as little as 10% of final price

Efficient agricultural markets can also be a potent tool for poverty reduction, noted this 2012 Reserve Bank of India report.

Farmers do not get remunerative prices due to the limited reach of MSP—less than 25% farmers know about MSP—and an agricultural marketing system that delivers only a small fraction (10 to 30% of the retail price, according to this Business Standard report) of the price to the farmer, said this NITI Aayog report.

Regulatory barriers have constrained investments in agriculture markets and lowered capacity of farmers to be domestically and internationally competitive.

Multiplicity of taxes under Agriculture Produce and Marketing Committee laws in various states have undermined interests of farmers and benefitted middlemen, said the NITI Aayog report.

Only 15% farmers benefited from crop insurance

Only 19 million — or 15% — Indian farmers benefitted from crop insurance schemes announced by the government in 2014-15. 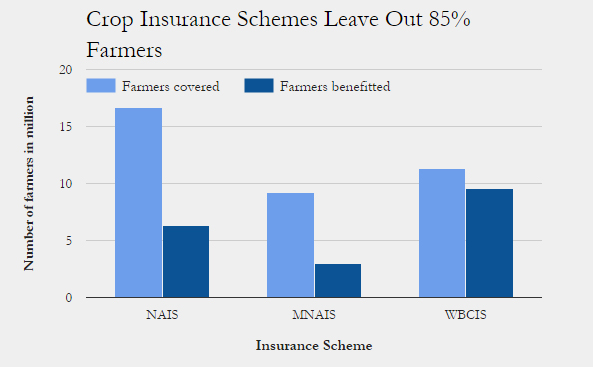 Half of those who did not use insurance were unaware of crop insurance, the NSS report said.

“China started off reforms with agriculture in 1978, and during 1978-84, agriculture GDP (gross domestic product) increased by more than 7% per year and farm incomes by more than 14% per year due to deregulation of prices, halving poverty in just six years,” Ashok Gulati wrote in this research paper.

With agricultural GDP in India growing 1% in 2015-16 (advance estimate), it will not be easy to increase individual farm incomes 14% per year.