Increase in gold demand arises when the opportunity cost of holding gold is negligible.

In his testimony after on the June meeting of the Federal Reserve, Jerome Powell gave a clear hint of dovish rates in the coming policies. This is also borne out by data coming from the CME FEDWATCH, a futures based indicator of the likely trajectory of rates.

The CME FEDWATCH tool indicates that there is 72.4% probability of a 25bps cut on July 31, 2019 and a 27.6% probability of a 50bps rate cut. Fed futures indicate that a rate cut is certain, although the magnitude is debatable.

Historically, gold reacts to Fed rates differently in the short term and the long term. In the short term there is an inverse relationship. When Fed rates fall the overall interest rates fall, the bond yields fall and the cost of funds come down in the economy. Increase in gold demand arises when the opportunity cost of holding gold is negligible. Hence there is a preference for holding gold over bonds and this results in a rise in price of gold. In the short term we see a fall in rates leading to weakening of the dollar and a strengthening of gold prices.

However, if you were to look at circumstantial evidence, the relationship is not that clear over the longer term. Let us first look at the seventies. During this period, the interest rates in the US were extremely high and the trajectory was also up. However, between 1971 and 1979, the price of gold went up from $35/oz to $900/oz. This was largely led by geopolitical uncertainty through this period. Secondly, we look at the period post the Lehman crisis in 2008. Central banks across the developed world cut rates drastically and brought it close to zero. However, between December 2008 and September 2011, the price of gold moved up from $870/oz to $1,900/oz, underlining our original theory of inverse relationship. Hence, the exact relationship is not very clear over the longer term as there are diverse signals.

Where is gold headed from here? 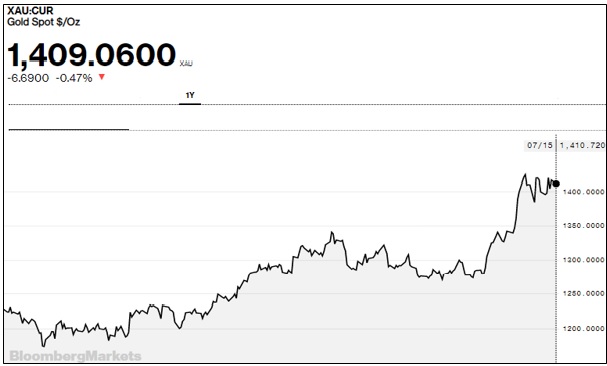 Over the last one year, the price of gold has moved up sharply from around $1,150/oz to $1,410/oz. With annualized returns of 23%, gold has been one of the best performing asset classes. Going ahead, gold prices are likely to be driven by four key factors.

a) The geopolitical and economic situation is currently fraught with uncertainty. Iran has threatened to block the Strait of Hormuz which is a conduit for 30% of global oil. The ongoing trade war between the US and China is also threatening to derail global growth. We have seen through the seventies and post-Lehman, that periods of economic and geopolitical uncertainty are favourable for gold demand and gold prices.

b) Interest rates are again headed lower. The Fed has turned dovish and the ECB and BOJ have also expressed their commitment to avoid monetary divergence. With falling bond yields and global funds queuing up for negative yields debt, the opportunity cost of holding gold is almost negligible. This can be positive for gold prices.

c) Weak growth is not great news for equity as an asset class. China just reported June quarter GDP growth of 6.2% (a 27-year low). The IMF has already downgraded global growth by 70bps for the next year. That again creates the right milieu for a rally in gold prices.

d) Currencies have been debased for quite some time but it is yet to show up due to the exorbitant privilege that the dollar enjoys. Experts opine that if China is pushed to the wall, they could trigger a devaluation of the Yuan and create chaos in global currency markets. Historically, all economies lose in a currency war; but that is exactly when gold could be a gainer.

In short, the combination of factors is supportive for gold prices. After a long effort, gold spot prices have crossed the $1,400/oz mark. It could just be headed higher!