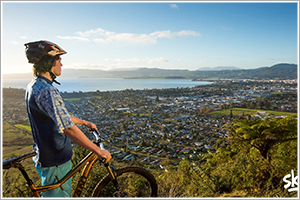 The Skyline gondola takes the hard work out of the park’s 200-metre vertical rise and allows for 3,000 runs a day

The world’s first year-round, gondola accessed mountain bike park was recently opened at Skyline Rotorua. Associate Minister of Tourism Hon Todd McClay, declared the park open this morning and top riders from around the country all descended on the trails to get a sneak peek before it opens to the public on Saturday 9 August.

McClay says the Skyline Rotorua Mountain Bike Gravity Park was an impressive result of the government’s Tourism Growth Partnership investment of $225,000, which funded a portion of the park’s development in partnership with Skyline Enterprises.

The Skyline gondola takes the hard work out of the park’s 200-metre vertical rise and allows for 3,000 runs a day. Eleven (out of 33) dedicated gondolas each take four riders and their bikes to the top of Mt Ngongotaha where the trails start.

The Gravity Park provides tracks for most skill levels with 8.5km of trails braiding down the side of the mountain, including multi-grade features, a 300m jumps section, and international-grade slope style and downhill lines.

The mountain bike park has full-time patrollers, monitoring trails and providing advice and assistance as required.

“Skyline Rotorua now offers  a true destination experience, from adventure with the Gravity Park, the new Zoom Zipline, the iconic Luge and the Skyswing, through to more relaxed experiences like the nature trails, Volcanic Hills wine tasting, the Jelly Belly Store, Market Kitchen and the restaurant,” he says.

“We have invested in the Gravity Park to target the fast growth market of mountain biking, which has seen huge success right here on this site before. Skyline Rotorua has previously hosted the UCI Mountain Bike World Championships in 2006, as well as two successful Rotorua Bike Festival Skyline Sprint Warrior downhill races. Both of which have seen a fantastic response from riders, the mountain biking community and the general public,” explains Thomasen.

Skyline Mountain Bike Gravity Park is the second mountain biking venture for Skyline Enterprises, with the Queenstown operation (opened in 2011) offering riders access to Queenstown District Council trails from September to May.

“The trails make you just want to session it run after run, and get quicker and quicker  – fast and flowing lines, into big berms and well-built jumps, with a bit of off-camber natural trail thrown in, just to keep you honest. The jumps at the bottom are like the icing on the cake, with big step ups, tables and structures, with more to come I have been told. This place is awesome.”

The park will offer everything from half day passes at $55, to full day, three day, three month, half year and full year passes at $899 (earlybird offer $799 till September 7) for unlimited gondola and downhill mountain bike trail access during opening times.