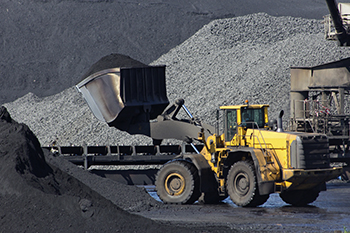 2015: Coal mine auctions hit a goldmine

The success of coal block auctions carried out by the new government has proved that its decision to conduct a “fair and transparent” bidding for coal mines has benefitted the country in a big way because India has actually hit a gold mine with the recently concluded auctions.

The year 2015 will be written in golden letters in the annals of history of coal sector in the country for the coal mines auction conducted in an efficient & transparent way. The success of coal block auctions  carried out by the new government has proved that its decision to conduct a “fair and transparent” bidding for coal mines has benefitted the country in a big way because India has actually hit a gold mine with the recently concluded auctions.

In order to laid down robust & transparent system after the Supreme Court order, an Ordinance was promulgated to legally enable the Government to re-allocate 204 coal mines cancelled by the court and ensure smooth transfer of right, title and interests in the mine along with its land and other associated mining infrastructure to the new allocatee to be selected through an auction or allotment to Government companies, as the case may be.   The Parliament passed the Coal Mines (Special Provisions) Bill 2015 on 20th March, 2015 which replaced the  Ordinance. Under the provisions of the Coal Mines ( Special Provisions) Act ,2015, the Central Government has so far successfully auctioned in three tranches 31 coal mines  and allotted  42 coal mines/Blocks to Central or State Government Companies .

The auction of coal mines has been universally hailed to be a success, which has not only ensured that there is no disruption in the economy in the wake of the order of the Supreme Court , but have also set new benchmark for efficiency and transparency.It is estimated that Rs 3.44 lakh crore of likely revenue to States through coal mines e-auctions & allotments over 30 years from just the three rounds of auction. The fourth round of auction of 8 coal mines (Schedule III) for non-regulated sector has also been announced.

Out of 34 operating coal mines auctioned/ allotted, nine mines have started coal production and have registered over 5Mt output and rest all expected to begin production in next 2/3 months.

Coal Indian Ltd (CIL) production jumped 8.8 per cent to 321.38 mt during April-November period of current fiscal while off-take soared by 9.8 percent.
In a historic decision, in order to meet the requirements of the industry, improve coal quality, promote efficiency as well as save the environment, CIL will supply 100% crushed coal to its customers from 1st April, 2016. The Ministry has decided to ensure supply of quality fuel by supplying crushed coal from Ist January next year.  CIL has also started the process of setting up 15 coal washeries to supply clean coal Grade 10 and above from October  2017.

Rationalisation of linkages has been done so far for 19 thermal coal plants resulting in annual saving of Rs 1423 crore in freight cost.

Details of Important initiatives & achievements of Ministry of Coal are as follows:

Coal Mines Auction & Allocation:
Under the provisions of the Coal Mines (Special Provisions) Act, 2015, the Central Government has so far successfully auctioned 31 coal mines and allotment of 42 coal mines/Blocks to Central or State Government Companies .    The auction and allotment proceeds from 73 coal mines (31 Coal blocks through auction & 42 coal blocks through allocation) have touched over Rs 3.44 lakh crore over the life of the mine, which shall be devolving entirely to the coal producing States.

Revenue which would accrue to the coal bearing State Government concerned comprises of Upfront payment as prescribed in the tender document, Auction proceeds and Royalty on per tonne of coal production. The estimated revenue which would accrue to coal bearing state during the life of mine/lease period from the Auction of 31 Coal Mines is Rs. 1,96,698 crore. In addition, an estimated amount of Rs. 1,48,275 crore would accrue to coal bearing States from allotment of 42 coal mines to Central and State PSU’s. Further, the benefit to consumers in terms of reduction of electricity tariffs is likely to be about Rs. 69,310.97 crore.

In the first half of the budget session, both the houses of Parliament passed the Coal Mines (Special Provisions) Bill 2015 and thus the ordinance became an act of Parliament.

Key highlights of Coal Mines (Special Provisions) Act 2015 are as follows:
The new Act has provisions for allocation of coal mines through a transparent bidding process i.e. E-auction.

The E-auction of coal blocks will ensure the continuity in coal mining operations and will promote optimum utilisation of coal resources.

It has provisions that propose strong measures for rehabilitation and compensation for displaced persons.

It enables sale of coal specially to small, medium and cottage industries which will increase employment & incomes in these sectors.
In the coal sector, Indian companies & Indian subsidiaries of foreign companies will be eligible for commercial mining. This provision is expected to attract global mining giants and make the sector more competitive and cost-effective.

*one coal mine is regionally explored and accordingly no estimates have been made.

Out of 34 Scheduled –II coal mines auctioned (17) and allotted (17), 9 coal mines have come under production. Production from these 9 coal mines up to September 2015 is 4.823 Million Tonnes (Prov.) Remaining mines are in different stages of obtaining various clearances.

The production of raw coal during first half (April-September) of 2015-16 was 275.29 Mte compared to 264.54Mte during the corresponding period last year. The overall growth in coal production during April-September 2015 was 4.1%.

Coal production and coal off-take by Coal India Limited (CIL), the state sector coal mining company, grew by 8.8% and 9.8% respectively during April-November 2015 on a year-on-year comparison. CIL increased its production by almost 26 Million Tonnes during April-November 2015 compared to same period previous fiscal, continuing its upward swing in production. The impetus laid on off-take also paid result as the volume increase in coal off-take during the period has been 30.44 Million Tonnes.

The increase in coal off-take of 30.44 Million Tonnes during April-November 2015 is two-and-a-half times more than that of 12.09 Million Tonnes achieved during same period last year.

In coal production, CIL posted a rise of 26 Million Tonnes during April-November 2015 as against 20.69 Million Tonnes in the same period previous year.

Higher coal production  has resulted in lower coal imports. The coal imports have been coming down by 4.56% since last year.

A number of steps have been taken to ensure quality of coal produced. To address the issue of dispute between coal companies and power utilities and to improve quality of coal, new rules for Third Party Sampling have been introduced. According to the new rules, the authorized representatives of power plant and Coal Company shall jointly witness the process of sample collection as per BIS standards by Third Party Agency appointed by CIMFR. The agency needs to communicate the analysis report within 18 working days of the sample collection. Also, the Government has decided that from 1st January 2016 onwards coal will be transported after being crushed to requisite level.

The Government  has also decided to transport coal above G10 level only after being washed from 1st October 2017. The decision is taken to tackle the quality issue of the coal produced. In order to meet the rising demand, CIL has been setting up 15 new washeries with a total capacity of 112.6 Mty. Out of these washeries, six are Coking Coal washeries with total capacity of 18.6 Mty and nine Non-Coking washeries of 94.0 Mty. Apart from these 3 washeries of 11.6 Mty are under construction.

Inter-Ministerial Task Force (IMTF) was constituted in June ,2014 to review rationalisation of linkages . Based on IMTF recommendations,  rationalization of coal sources for 15 Thermal Power Plants (TPPs) has been achieved under Stage I. Movement of 19 MT coal has been rationalized resulting in annual recurring saving of Rs 877 crore on transportation cost. Under Stage II proposals, transportation of 2.4 MT coal has been rationalised for 4 TPPs, resulting in potential recurring savings of Rs 563 crore per annum.

An Inter-Ministerial Committee (IMC) has been constituted in the Ministry in January 2015 to consider various models including auctioning of coal linkages/LoAs through competitive bidding as the selection process and to recommend the optimal structure that would meet the requirements of all stakeholders.

CIL Gearing up for One Billion Tonne Coal Production Mark:

Coal India Limited (CIL), had unveiled its road map, of strategies to be adopted, to attain the one Billion Tonne (BT) coal production mark by 2019-20. With the projected coal demand of the country hovering around 1,200 Million Tonnes (MTs) by 2019-20, at an envisaged growth rate of 7 per cent, CIL is expected to chip in one BT, of which 908 MTs is the expected contribution from the indentified projects. The process of identification of projects to share the balance quantity, to top up the one BT mark, is also underway. The two CIL subsidiaries Sambalpur based Mahanadi Coalfields Limited and the Bilaspur based South Eastern Coalfields Limited are expected to play a pivotal role in CIL’s quest of attaining the one BT production with 250 MTs and 240 MTs respectively. The key issues that the coal miner is basically relying on are timely completion of three critical railway lines and timely land acquisition and green clearance.
CIL has assessed a tentative capital investment of Rs 57,000 crore for next five years to ramp-up its coal production to 908.1Mt. from production level of 494.80 Mt in 2014-15 as part of the road map for production of IBT coal by 2019-20.

In order to help CIL to achieve its stupendous coal production target of one billion tonnes by FY 2020, Western Coalfields Limited is planning to enhance its coal production by 150%.  It has already opened 10 mines in the last 10 months and will be opening 26 mines in next 26 months. With this planned expansion, WCL has revised  its goal from 60 mt to 100 mt of coal by 2020 by enhancing its production by 150%.

In order to maintain the planned growth in production and evacuation of coal , Memorandum of Understandings (MOUs) have been signed among Ministry of Railways (MoR), Ministry of Coal (MoC) and Governments of Odisha ,Jharkhand and Chhattisgarh  for development of rail infrastructure  through formation of a Joint Ventures (JVs) .

Coal Projects Monitoring Portal (e-CPMP) has been established in the Ministry to fast track clearances and pending issues of coal projects  at State Government as well as Central Ministries .

The Coal Ministry in association with Ministries of Power and New & Renewable Energy were committed to construct a total of 1 lakh toilets in Government Schools within one year. CPSUs namely NTPC, REC, PGCIL, PFC, NHPC, SJVNL, THDC, NEEPCO, CIL, NLC and IREDA participated in the Swachh Bharat Abhiyaan. The three ministries collectively completed construction of more than 1.28 lakh numbers of toilets in schools across the country in short span of one year, surpassing the commitment of 1 lakh toilets. Out of these , 55,286 toilets were constructed by CIL & its subsidiaries.