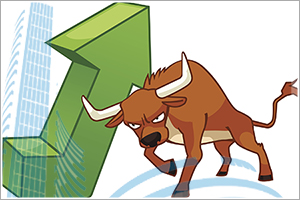 Commenting on the IndusInd Bank results, Amar Ambani, Head of Research, IIFL said, “The banking results season kicked-off on a strong note with IndusInd Bank delivering a better-than-estimated earnings growth of 25% yoy. While the headline loan growth at 23% yoy was sturdy, the continued revival in consumer finance business was a key positive. Unlike the previous quarter, asset quality performance was impressive with delinquencies reverting to sub-normal level of below 1%. Our view on the bank stays positive.”

Return of risk appetite after Greece and Euro nations reached a bailout deal post more than 17 hours of talks on the thorny subject of reforms and more financial aid for the near-bankrupt country sent the bulls on the rampage. Local equity markets, extending previous sessions’ strength to the new week, concluded upbeat for second consecutive session on Monday with gains of around one percent. Sensex and Nifty ended above 27,950 and 8450 levels respectively.

Nothing deterred the spirit at Dalal Street, not even May IIP data, which in an ugly surprise grew by dismal 2.7% to 180.0 in the month of May, way below than the previous month’s figure of 4.1% and street expectation of figure of around 4%. Although, bit of somberness in early deals could be well attributed to the dismal macro-economic data, things took a turn for good post the European market opening.

On the global front, Asian shares mostly ended upbeat as investors took heart from strength in recently volatile Chinese markets and after Greece's offer of a new reform plan raised hopes of a deal at a weekend summit of European leaders, though many investors remained uncertain of a best-case outcome for the Greek crisis. Meanwhile, Shares in key European markets turned euphoric after European Council President Donald Tusk said a bailout for Greece was "all ready to go". European Commission President Jean-Claude Juncker said there would be no Greek exit from the euro currency union, adding that he was convinced that Greek government and the Greek parliament would be able to pass all the decisions agreed at the summit.

Closer home, almost all the sectoral indices on BSE concluded in green, however stocks from Capital Goods counter proved to be an exception. Shares of capital goods firms eased in early trade Monday following a disappointing performance from the segment in the recently released May IIP numbers. As per the data released by the government on Friday post market close, capital goods segment grew at a dismal 1.8 percent in May compared with 6.8 percent in April, an indication that revival in investments has been inconsistent. On the other side, stocks from Information Technology, Technology and Auto counters were the top gainers of the session.

Commenting on the results, Amar Ambani, Head of Research, IIFL said, “The banking results season kicked-off on a strong note with IndusInd Bank delivering a better-than-estimated earnings growth of 25% yoy. While the headline loan growth at 23% yoy was sturdy, the continued revival in consumer finance business was a key positive. Unlike the previous quarter, asset quality performance was impressive with delinquencies reverting to sub-normal level of below 1%. Our view on the bank stays positive.”

The market rallied smartly in the second-half of the trading session following news that the Eurozone leaders reached an agreement over Greece bailout programme. Following the news, the BSE index, which was trading on a flat note, soon firmed up and surged to higher levels on the back of all-round buying support. The BSE index touched a high of 28,005 - up 370 points from the day's low.

Earlier in the day, the BSE index had opened 79-odd points higher at 27,739, but had pared gains and slipped wee bit into red to a low of 27,635 amid uncertainty surrounding the global financial market and poor IIP data.

The Ministry of Statistics and Programme Implementation on Friday, after market hours, announced that India's industrial output grew at a disappointing 2.7 percent in May as against 4.1 percent in April 2015. IIP in May 2014 grew at a strong 5.6 percent.

The Sensex finally ended the day with a significant gain of 300 points at 27,961.

Elsewhere in Asia, the Shanghai Composite extended its winning rung into the third straight trading session and was up 2.4 percent at 3,970. The Nikkei and the Hang Seng rallied around 1.5 percent each to 20,090 and 25,224, respectively.

Back home, the broader market also rallied in-line with the benchmark indices. The CNX Nifty Junior, Midcap and the Smallcap indices surged over 1.2 percent each to 20,463, 13,433 and 5,564, respectively.

The breadth too was significantly bullish with more than two advancing shares for every single declining stock. Out of 1,723 stocks traded on the NSE, 1,009 advanced and 472 declined today.

HCL Technologies was the top gainer in the Nifty-50. The stock zoomed nearly 4 percent to Rs. 962.

Bharat Petroleum Corporation (BPCL) surged over 3.5 percent to Rs. 913 amid media reports that the company is planning to expand its Bina oil refinery in Madhya Pradesh by 30 percent to 156,000 barrels per day at a cost of about $ 472 million.

Gail India advanced 3 percent to Rs. 372 amid media reports that the company has launched a tender to buy to Liquefied Natural Gas (LNG) cargoes for prompt delivery, linked to demand for gas by various local fertiliser companies.

Asian Paints also gained 3 percent at Rs. 819 following reports that the strike at the company’s Sriperumbudur plant in Tamil Nadu was called-off and normal work operations were resumed. Operations at the plant were affected after the workers union went on strike from 28 April, 2015.

Mahindra & Mahindra (M&M) was up 1.7 percent at Rs. 1,270 on plans to seek shareholders' nod to raise up to Rs 5,000 crore on private placement basis in domestic and/or international markets.

There were only three losers in the Nifty-50 today. ONGC declined a percent to Rs. 291 after the company said that its overseas arm ONGC Videsh has decided not to exit a Vietnam oil block in the contested waters of the South China Sea despite poor hydrocarbon prospectivity.

Among other stocks - Suven Life Sciences soared 7.5 percent to Rs. 253 after the company informed BSE that it has secured 4 (four) product patents for their NCE's in China, Mexico and South Africa.

IL&FS Transportation Networks surged to a high of Rs. 146 on winning long-term contract from the Jharkhand government for 6 laning of Ranchi Ring Road, Section VII from Kathitanr to Karma on Built Operate Transfer (BOT) basis. The estimated cost of the project is Rs. 587.60 crore and the company shall receive a semi-annual annuity of Rs. 55.82 crore over the next 17.5 years. The stock finally ended a tad higher at Rs. 142.

Dhanlaxmi Bank zoomed 5.5 percent to Rs. 33.25 on push for merger. According to media reports, the All India Bank Officers' Association (AIBOA) on Friday said the Reserve Bank of India (RBI) should initiate immediate steps to merge the loss-making Dhanlaxmi Bank with a nationalised bank citing conflict of interest in managing the affairs of the bank between the board and the top-level management.

Ballarpur Industries surged 7 percent to Rs. 15.53 after the company's board approved a proposal to divest its entire 98.08 percent stake in a step down subsidiary, Sabah Forest in Malaysia.

Sintex plunged 6 percent to Rs. 101 on the back of muted Q1 performance. According to release issued by the company to the BSE, the company reported consolidated net profit of Rs. 69 crore for Q1FY15, as against Rs. 61.59 crore in a year ago period. Total income increased by 10.5 percent to Rs. 1,490 crore from Rs. 1,348 crore.

PVR soared 4 percent to Rs. 712 after the company's shareholders approved a proposal to issue 433,143 equity shares to Plenty CI Fund on preferential basis at Rs. 700 each.

MRPL added nearly 0.5 percent to Rs. 74.20 on buzz of the company had made its first purchase of Brazil's Ostra crude.

Supreme Industries slipped 1.6 percent to Rs. 646 on reports that the foreign institutional investors (FIIs) will now need RBI approval for fresh purchases at the counter as their holding had hit the maximum investment limit of 22 percent in the company.

A total of 67 stocks registered a fresh 52-week high in trades today, while 18 stocks declined to a new 52-week low.