Building on the broader optimism that the new government will initiate reforms after two successive years of sub-5% growth, PM Modi outlined ten priorities for his team.

Building on the broader optimism that the new government will initiate reforms after two successive years of sub-5% growth, PM Modi outlined ten priorities for his team. These revolve around building confidence in the bureaucracy, minimal government interference and introducing infrastructure and investment reforms. While these are still broad strokes, there is an emphasis on improving governance alongside structural recovery. After consultation with the ministry’s officials, cabinet members need to set the first 100-days’ agenda, which will be up for discussion at July’s parliament session. The first parliamentary session is scheduled for 4-11 June. 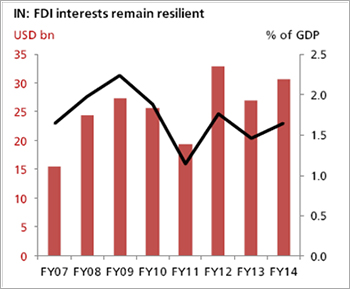 Yet so far, the official rhetoric has been encouraging, with the Finance Minister reportedly reviewing cause(s) of weak revenue collections last year and seeking a thorough review of the nationwide GST initiative. As the fiscal numbers are combed through, it might become evident that meeting the interim fiscal target will be an uphill task. Nonetheless, it will be important to establish a medium-term roadmap for fiscal consolidation and plan of action to meet the nominal targets.

On the investment policy, a liberal foreign investment framework is reportedly in the works, which might see the Finance Ministry permit at least 49% FDI in most sectors, except the strategic industries, according to the press. Bulk of these approvals might be brought under the automatic route, to ensure that the domestic companies have a controlling stake in the business interests. This cap is expected to be a single-limit, including all types of investors – non-residents, FII, FDI etc. Provided the government is able to ensure clarity, regulatory ease and institutional support to the foreign investors, there is likely to be ample interest. As the accompanying chart highlights, despite the domestic slowdown and policy paralysis last year, FDI continued to trickle in and remained relatively stable at circa 1.5% of GDP in FY13/14.

In the meantime, Jan-Mar14 (final quarter FY1314) GDP growth numbers are due today. The economy likely expanded 4.6% YoY vs 4.7% in the previous quarter. This will take FY13/14 GDP to 4.6%, nearly unchanged from FY12/13’s 4.5%. Sharp cutback in government spending will shave some crucial points off headline growth. Fiscal spending was likely restrained to meet tough targets and comply with the imposition of the pre-election code of conduct. Agricultural production likely moderated at the margin due to unseasonal weather conditions. Higher exports must have cushioned the net exports position, just as merchandise imports slumped 14% YoY, halving the trade deficit. Capital formation is unlikely to have registered a rebound with the manufacturing sector barely above water, even as external demand stabilized. Firm headline and food CPI likely hurt purchasing power and necessitated a tight monetary policy. That said, some support to consumption is likely to have stemmed from pre-election spending and kept the key driver at close to 3% mark.